The Power of Habit

Why We Do What We Do, and How to Change

Why can some people and companies change overnight, and some stay stuck in their old ruts? The answer lies deep in the human brain, and The Power of Habits reveals the secret pressure points that can change a life. From Olympic swimmer Michael Phelps to Martin Luther King Jr., from the CEO of Starbucks to the locker rooms of the NFL, Duhigg explores the incredible results of keystone habits, and how they can make all the difference between billions and millions, failure and success - or even life and death.

The Power of Habit makes an exhilarating case: the key to almost any door in life is instilling the right habit. From exercise to weight loss, childrearing to productivity, market disruption to social revolution, and above all success, the right habits can change everything.

Habits aren't destiny. They're science, one which can transform our businesses, our communities, and our lives.
______________________________
'Plenty of business books that try to tap into the scientific world manage to distil complicated research into readable prose. But few take the next step and become essential manuals for business and living. The Power of Habit is an exception.' ANDREW HILL, FINANCIAL TIMES

Charles Duhigg is a Pulitzer Prize-winning investigative reporter for The New York Times and the author of The Power of Habit. He is a winner of the National Academies of Sciences, National Journalism, and George Polk awards. A graduate of Harvard Business School and Yale College, he lives in Brooklyn with his wife and two children. 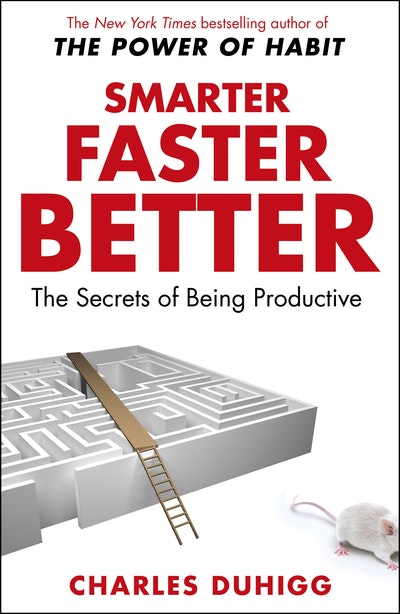 Praise for The Power of Habit

In this fascinating book, Charles Duhigg reveals the myriad ways in which our habits shape our lives. Do you want to know why Febreze became a bestselling product? Or how the science of habits can be used to improve willpower? Read this book.

Once you read this book, you'll never look at yourself, your organisation, or your world quite the same way.

This is a first-rate book - based on an impressive mass of research, written in a lively style and providing just the right balance of intellectual seriousness with practical advice on how to break our bad habits.

Duhigg gives a compelling insight in to the world of subconscious behaviour. This is no homespun remedy, Duhigg's observations have real, scientific gravitas.

In his book The Power of Habit Charles Duhigg approaches the subject of what habits are and how we can ultimately change them. Written in an engaging style, with just the right balance of scientific fact and actual examples...

The Power of Habit steps sideways into science and brain chemistry to back up its key message: that identifying and implementing keystone habits is the difference between success and failure, whatever your goals. So if you're a procrastinator, or a sleeper-inner, pick it up - and see how quickly you can morph those habits into habitual success. When you get around to it, obviously.

This fascinating book by a New York Times journalist explores how people get stuck in a rut and delves into psychological and neuroscientific research to find out what it takes to change our most deeply ingrained habits.

Few [books] become essential manuals for business and living. The Power of Habit is an exception. Charles Duhigg not only explains how habits are formed but how to kick bad ones and hang on to the good.

Entertaining . . . enjoyable . . . fascinating . . . a serious look at the science of habit formation and change.

A fresh examination of how routine behaviours take hold and whether they are susceptible to change . . . The stories that Duhigg has knitted together are all fascinating in their own right, but take on an added dimension when wedded to his examination of habits.

There's been a lot of research over the past several years about how our habits shape us, and this work is beautifully described in the new book The Power of Habit.

I have been spinning like a top since reading The Power of Habit, New York Times journalist Charles Duhigg's fascinating best-seller about how people, businesses and organizations develop the positive routines that make them productive-and happy.

The Power of Habit is chock-full of fascinating anecdotes . . . how an early twentieth century adman turned Pepsodent into the first bestselling toothpaste by creating the habit of brushing daily, how a team of marketing mavens at Procter & Gamble rescued Febreze from the scrapheap of failed products by recognizing that a fresh smell was a fine reward for a cleaning task, how Michael Phelps' coach instilled habits that made him an Olympic champion many times over, and how Tony Dungy turned the Indianapolis Colts into a Super Bowl-winning team.

There is a reason this book has been an international bestseller . . . I was hooked from the first page.