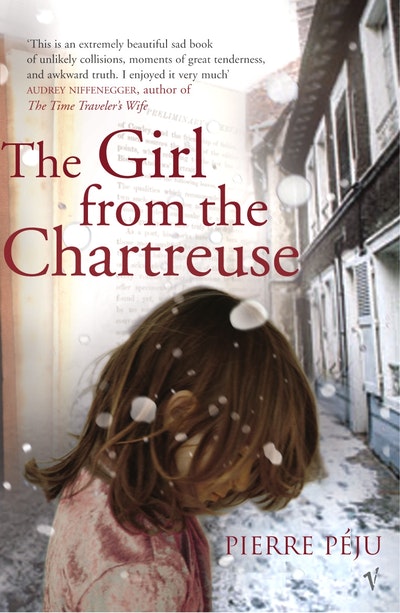 The Girl from the Chartreuse

An outstanding prize winning, best-selling French novel. "An unbearable and magnificent novel - on how the ocean of literature breaks against the silence of childhood", Le Nouvel Observateur

The owner of the bookshop THE VERB TO BE, is a red-haired giant imprisoned in an enormous body and his solitude. One wet afternoon, driving a vanload of new and second-hand books, ÉtienneVollard knocks down and seriously injures a little girl, Éva. In the hospital, he meets Éva's mother, Thérèse, a struggling single parent who lacks maternal instincts and whose dream is to be faraway, alone. Both are haunted by guilt: Thérèse because of her lateness in collecting her daughter, and Vollard because he did not manage to stop his car on time (even if he knows that he could not have avoided -va: indeed she seemed to throw herself in front of the car). Vollard visits Éva regularly while she is in a coma and reads books to her, while Thérèse spaces her visits out. When Éva eventually wakes up, she has become mute and is terribly weakened. A few weeks after Éva has been sent to a rehabilitation centre in the Massif de la Chartreuse, Thérèse gets a job faraway and asks Vollard to visit her daughter on her behalf. Soon, Vollard enjoys their walks in the mountain, where he tells her stories and poems he has memorized and tries to break her out of her mute, impassive shell. However, nothing seems to help "La Petite Chartreuse" - Vollard calls Éva that way in reference to the monastic order of the Chartreux - to enjoy life again. She becomes weaker everyday to such a point that Vollard decides to find Thérèse and to take her back to her daughter before it is too late . . .

Pierre Peju, writer, philosopher and director of studies at the International College of Philosophy, has written several books. The Girl from the Chartreuse met with an exceptional critical and commercial success in France.

Praise for The Girl from the Chartreuse

'Peju's real subject is literature itself...Péju treads a fine line between pretension and profundity, layering his text with many others from the Gospels to Becket and Borges, but his own words, weighed against theirs, are rarely found wanting.'