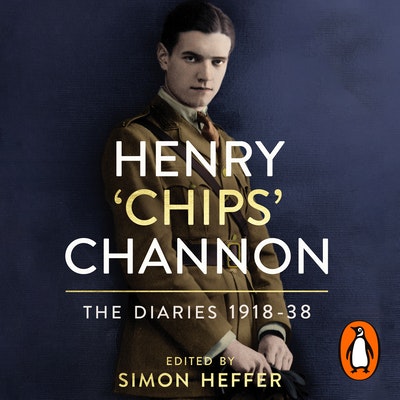 Born in Chicago in 1897, 'Chips' Channon settled in England after the Great War, married into the immensely wealthy Guinness family, and served as Conservative MP for Southend-on-Sea from 1935 until his death in 1958. His career was unremarkable. His diaries are quite the opposite. Elegant, gossipy and bitchy by turns, they are the unfettered observations of a man who went everywhere and who knew everybody. Whether describing the antics of London society in the interwar years, or the growing scandal surrounding his close friends Edward VIII and Wallis Simpson during the abdication crisis, or the mood in the House of Commons in the lead up to the Munich crisis, his sense of drama and his eye for the telling detail are unmatched. These are diaries that bring a whole epoch vividly to life.

A heavily abridged and censored edition of the diaries was published in 1967. Only now, sixty years after Chips's death, can an extensive text be shared.
________________________________
'Chips perfectly embodied the qualities vital to the task: a capacious ear for gossip, a neat turn of phrase, a waspish desire to tell all, and easy access to the highest social circles across Europe.[...] Blending Woosterish antics with a Lady Bracknellesque capacity for acid comment. Replete with fascinating insights.' Jesse Norman, Financial Times

Sir Henry (Chips) Channon was born in Chicago in 1897 (although he claimed 1899 as the year of his birth, until the true facts were exposed – to his embarrassment – in the Sunday Express). The son of a wealthy businessman, he accompanied the American Red Cross to Paris in 1917, was an undergraduate at Christ Church, Oxford, and then settled in London where he mingled with society and enjoyed the high life. He married into the Guinness family, and became a Conservative MP for Southend from 1935 until his death. He knew or was friends with all the leading politicians and aristocrats of the period, wined and dined Edward VIII and Wallis Simpson in the months before the Abdication crisis, and observed at first hand the last days of appeasement. He died in 1958. Elliot Templeton in Somerset Maugham's novel The Razor's Edge (1944) and the disappointed schoolmaster Croker-Harris in Rattigan's play The Browning Version (1948) were partly inspired by Channon.

Channon's chief virtue as a writer is his abiding awareness that dullness is the worst sin of all, and for this reason they're among the most glittering and enjoyable [diaries] ever written

Although Channon was frequently wrong and occasionally repellent, there is no denying his talent as a diarist or the historical value of his diaries. Lacking pomposity or dissemblance, his entries are often witty, sometimes perceptive, and always fascinating

The between-the-wars diaries of the romping, social-climbing MP Henry Channon make for an irresistible, saucy read. There are plenty of anecdotes, bons mots and delicious tales of scandal . . . one of the most impressive editions of our time.

The greatest British diarist of the 20th century. A feast of weapons-grade above-stairs gossip. Now, finally, we are getting the full text, in all its bitchy, scintillating detail, thanks to the journalist and historian Simon Heffer, whose editing of this vast trove of material represents an astonishing achievement. Channon is a delightful guide, by turns frivolous and profound.

The diaries are fascinating and sometimes a key historical record. And the man could write.

Heffer has done his job with scholarly aplomb. Throughout his life [Chips] had the knack - invaluable for a diarist with dreams of publication - of bumping into all the right people. Fascinating stuff . . . a work of high camp.

Gripping reading . . . While countless of Chip's decent contemporaries and especially politicians are today forgotten, the diaries make him an indispensable source for anyone writing of this period.

Chips Channon, the bisexual snob and socialite who hobnobbed (and more) with royalty, politicians and famous writers . . . a new, expanded version of his disclosures has left some readers gasping at his audacity, indiscretion and promiscuity.

AN Wilson, The Times Weekend Essay

Channon is a delightful guide, by turns frivolous and profound.

The Times Book of the Week

Chips perfectly embodied the qualities vital to the task: a capacious ear for gossip, a neat turn of phrase, a waspish desire to tell all, and easy access to the highest social circles across Europe . . . Blending Woosterish antics with a Lady Bracknellesque capacity for acid comment. Replete with fascinating insights.

Sensation, spite, social climbing, high society, self-indulgence, sex; Chips Channon had the raw materials to make his uncensored diaries newsworthy a century after he began them. They shock, repel and compel because they don't conceal . . . He is calculating, selfish, amoral, vain, ambitious and deluded, and more of us should follow his example. Not in the living, but in the recording of it.

A masterpiece of storytelling and character assassination . . . Heffer's footnoted forays into Burke's and the Almanach de Gotha are worth reading alone for the picture they paint of a world so shifting and slippery that forging an identity is as much an act of will as an accident of history.

Book of the Day, Guardian

Heffer has done a stupendous job. Eminently worth publishing.

A compelling account of the extraordinary times of interwar Britain. Reading Chips is like eating a rich cream. Impossible to put down. A superb edition of an indispensable chronicle.

Channon, then, was a cipher for his times. An unremarkable politician, a mediocre intellect, and the morals of an alley cat on Viagra, did not prevent him from being the most acute commentator on his era.

This enthralling book confirms Channon as the "greatest British diarist of the 20th century" . . . It's packed with "weapons-grade above-stairs gossip" and superb one-line put-downs: Stravinsky looks "like a German dentist" . . . it provides an unrivalled guide to society and politics in the interwar years.

Book of the Week, The Week

In his heyday, Tory politician Sir Henry 'Chips' Channon knew everyone and was present at almost every big event of the first half of the Twentieth Century . . . The diary is a whopper but there are gems on every page. Highly recommended and I'm looking forward to volumes two and three.

Many complicated human relations are on display in these irresistible diaries . . . The editor deserves the greatest praise. He has rightly included everything that brings Channon's shimmering brittle world to life . . . He has a gift for the sharp, striking phrase which bring events to life. If diaries are to achieve immortality, the diarist must be a first-class writer. Channon passes that with flying colours.

Better than any history or histories of these two decades . . . like a fusion of Debrett's and the Almanach de Gotha . . . Scrupulously scholarly . . . Simon Heffer has done a great service by revealing in this extraordinary new edition of the Channon diaries the decadence and complacency of the English political and upper classes.

The abundant footnotes . . . swarm with everything you might want to know about the British aristocracy between the wars . . . It's like reading Bertie Wooster set loose among the pages of Burke's Peerage, with lots of sucking-up where the jokes ought to be . . . His pen portraits of friends and rivals alike are etched in acid.

The fascinating, unexpurgated interwar diaries of the Tory MP and social alpinist Henry "Chips" Channon, who met everyone who was anyone from Hitler to kings, the Pope and the Mitfords. Bonking, snobbery and bitchy remarks abound in this big beast of a book.

These unabridged, risqué, waspish, snobbish, social-climbing diaries have been worth the wait . . . All credit to Simon Heffer for his masterly editing and annotation.

The diaries are indeed indispensable for anyone seriously interested in the political and social history of interwar Britain.

Brilliantly and painstakingly edited by Simon Heffer. The enlarged Channon diaries have rightly attracted a great deal of attention . . . they are more detailed and more frank, and maybe more honest, about the opinions and sexual escapades of some of the leading figures in British politics and high society in the years between the world wars.

It sounds perverse to say that Channon's snobberies and prejudices make the diaries, but the unabashed exposure of these failings gives you an oddly impressive picture of a person in the setting of his time - the picture, I mean, is absorbing, whatever the subject's shortcomings. And though this colossal self-portrait describes much that's misguided, vain, and idiotic, it prompts you too to imagine those perishable qualities that history and biography so often fail to capture: the charm, generosity, personal magnetism, and brilliance of conversation that must have explained and sustained Chips's progress, the "success after success" that the diaries record and celebrate.

A fabulous potpourri of first-hand history, snobbish gossip, acute insight and stomach-churning enthusiasm for Nazism (by no means unique among the British upper-classes at the time). Channon was vain, funny, bitchy, clever, pithy and fabulously well-connected: all the qualities of a superb diarist.

One of the most talked about books of this year . . . compelling and significant.

Dripping with bons mots, anecdote and scandal, [these] are addictive, even if they elicit repulsion as well as delight.