Patti Harney stops her unmarked sedan two blocks shy of her destination, the narrow streets packed with patrol cars, the light bars on top of the units shooting a chaos of color into the night. Must be twenty squad cars at least.

Patti ditches her car, puts the lanyard around her neck, her star dangling over her T-shirt. The air outside is unseasonably cold for early April. Still, Patti feels nothing but heat.

She runs a block before reaching the yellow tape of the outside perimeter, the first officer stepping forward to stop her, then seeing her star and letting her pass. She doesn’t know that perimeter cop, and he doesn’t know her. All the better.

Getting closer now. The sweat stinging her eyes, the T-shirt wet against her chest despite the cold, her nerves jangling.

She knows the condo building even without following the trail of police officers to the place where they’re gathered under the awning outside. One of those cops—a detective, like Patti—recognizes her, and his face immediately softens.

She rushes past him into the lobby of the building. It’s more like a funeral than a crime scene, officers and plainclothes detectives with their eyes dropped, anguished, their faces tear-streaked, some consoling each other. No time for that.

She works her way toward the elevator, casting her eyes into the corners of the lobby for security cameras—old habit, instinct, like breathing—then sees a group of techies, members of the Forensic Services Division, working the elevator, dusting it for prints, and she spins in her gym shoes and pushes through the door to the stairs. She knows it’s on the sixth floor. She knows which apartment.

She takes the stairs two at a time, her chest burning, her legs giving out, a riot breaking out in her stomach. Woozy and panicked, she stops on the third-floor landing, alone among the chaos, and squats down for a moment, grabbing her hair, collecting herself, her body trembling, her tears falling in fat drops onto the concrete.

You have to do this, she tells herself.

She motors up the remaining stairs, her legs rubbery, her chest burning, before she pushes through the door to the sixth floor.

Up here, it’s all business, photographs being taken, evidence technicians doing their thing, blue suits interviewing neighbors, and Ramsey from the ME’s office.

She takes a step, then another, but it’s as if she isn’t moving forward at all, gaining no ground, like she’s in some circus house of horrors—

A hand taking hold of her arm. As if in slow motion, her eyes move across the face of the Wiz, the bushy mustache, the round face, the smell of cigar—

She shakes her head, tries to wrangle her arm free.

The Wiz angles himself in front of her, blocking her from the door.

A crime scene. Like this is just another act of violence she would encounter in the course of her job.

“Not this one, Detective. Not yet. Give us a chance to—Patti, c’mon—”

She bats away his hands, drives him backwards. He struggles for a moment before he braces her shoulders.

“Patti, please,” he says. “Nobody should see their brother like this.”

She looks into his eyes, not really seeing him, trying to process everything, thinking that he’s right, that she doesn’t want to see him, because if she doesn’t see him he won’t be dead, he won’t really be gone—

The ding of the elevator.

But—the elevator’s been taken out of service. The boys with FSD were dusting it. Who’s using the elevator? Someone must have pulled rank—

“Chief of Ds is here,” someone says.

She looks over Wizniewski’s shoulder.

The tall, angular figure, those long strides, the beak nose — which she did not inherit.

“Dad,” she says, the word garbled in her throat, feeling every ounce of control vanishing.

Her father, chief of detectives Daniel Harney, a sport coat thrown over a rumpled shirt, his thinning hair uncombed, his eyes already shadowed. “Baby,” he says, his arms opening. “Oh, my little angel.”

“Is it true, Dad?” she speaks into his chest as he holds her tight, as if he would know, as if she’s a toddler again, looking to her father for all the answers in the universe.

“I want to see him,” says her father, not to her but to Wizniewski. He locks arms with Patti, as if escorting her down the aisle, and turns toward the door.

Her father looks down on her, his face bunched up, a dam holding back a storm. She nods back to him.

His voice breaks as he says, “Lead the way, Lieutenant.”

She clicks off something in her mind and flicks on a different switch. She will be clinical. She will be a detective, not a sister. She will view a crime scene, not her dead twin brother. Clutching, clinging with all her might to her father’s arm, stepping onto the tiled entryway of the condo.

She knows the place. It opens into a great room, a small kitchen to the left, bedroom and bathroom in the back. Pretty standard high-rise condo in Chicago, anyway, but she knows this one in particular. She’s been here before.

The first time was yesterday.

The apartment goes immediately silent, as if someone raised a hand for quiet. Everyone busy at work dusting or photographing or collecting samples or talking—everyone stops as the chief of Ds and his daughter, a detective in her own right, enter the room.

Patti does her detective thing. No sign of struggle in the front room, the main room. Furniture in place, the tile shiny and clean, no sign of activity other than what the detectives and technicians are doing.

Someone had turned the air conditioner on full blast, the air good and cool, which should moderate lividity—

“It’s in the bedroom,” says Wizniewski, leading the way. “Now, I can’t let you go in there, Chief, you understand that. You’re the immediate family of one of the—”

“I just want to see. I won’t walk in, Lieutenant.” Her father, in that precise, resolute way he has of speaking, though she is probably the only one who recognizes the tremor in his voice.

Patti’s eyes moving about, seeing nothing. Amy kept a clean apartment. She’s seen, in her time, plenty of attempts to clean up a crime scene, and this shows no signs of recent scrubbing or spraying or incomplete attempts to wipe away smears or vacuum up debris. No violence happened in the great room or the kitchen.

Everything that happened happened inside the bedroom.

Her father delicately positions himself ahead of Patti, a protective gesture, allowing him the first look inside the bedroom. He leans over the red tape, takes a deep breath, and turns to his right to look inside.

He immediately squeezes his eyes shut and turns away, holding his breath, immobile. He swallows hard, opens his eyes—now deadened, filled with horror—and turns back and looks again.

He murmurs, “What in God’s name happened here?”

She hears Wizniewski breathe a heavy sigh. “The position of the bodies, everything—it looks pretty much like what it looks like, sir.”

Patti steels herself and angles past her father, looking into the room.

Three dead bodies. Kate—Detective Katherine Fenton—lying dead on the carpet, her eyes staring vacantly at the ceiling, a single gunshot wound over her right eye. A pretty clean shot, only a trickle of blood running from the wound, the rest of the blood following gravity’s pull, probably leaving through the exit wound in the back of her skull, soaking the carpet beneath her, obscured by her auburn hair. Her Glock pistol lying just outside the reach of her left hand.

She focuses on Kate—not because she’s never seen a dead body (she’s seen dozens), and not because she liked Kate (she didn’t), but because it’s preferable to what else there is to see in the room, something that thus far has only leaked into her peripheral vision.

Two bodies on the bed—her brother Billy and Amy Lentini, each of them naked. Amy with a GSW to the heart, a single shot. Her body sprawled out, her head almost falling off the bed’s left side, a large bloodstain barely visible behind Amy, where she bled out.

Billy. She fixes on him, her heart drumming furiously, heat spreading across her body as she looks at her twin brother sitting upright on the bed, blood streaked down the right side of his face, his head lolled to the side, his eyes closed and peaceful.

Take away the blood, the wound, and he could just as easily be sleeping. He could do that in a way she never could. She’s always had to sleep on her side, a pillow between her legs. Not Billy. He could sleep all night in a chair or sitting up in bed.

He could catch some shut-eye in the middle of geometry class without making a single sound, without snoring or jerking or anything that would give him away—he could sleep in secret just as he could live in secret, just as he could do just about anything in secret. He could hide his fears, his emotions, his thoughts, his sorrows behind that implacable, genial expression of his. She was the only one who knew that about him. She was the only one who understood him.

“Too early to know, of course,” Wizniewski says to her father. “Sure looks like Detective Fenton walked in—on this, on them— and opened fire. Billy shot back. They killed each other. A fuckin’ shoot-out at the OK Corral right here in the bedroom.”

No, Patti thinks to herself. That’s not what happened here.

Her legs giving out, her head dizzy. An arm pulling her away, her father, and just as much as she dreaded seeing Billy, even more so now she dreads taking her eyes off him.

Her father pulls Patti back into the main room. The officers all stop what they’re doing and stare at father and daughter as if they were museum exhibits.

Behind Patti, medical personnel slip past and head into the bedroom with body bags.

“We do this by the book,” her father says to the room. “That’s my son in there, yes, but he was a cop. Before anything else, he was a cop. A damn fine one. Honor him and Detective Fenton by doing this case right. By the book, people. No mistakes. No shortcuts. Be at your best. And get me—”

Her father chokes up. Solemn nods all around. Patti’s chest is burning, so hot she struggles to breathe.

“Get me a solve,” her father finishes. “Solve this crime.”

Suddenly feeling claustrophobic, Patti turns and heads for the door. This isn’t real, she decides. This didn’t happen.

Just as she’s at the door, she hears the words. Not from her father. Not from any of the officers in the main room.

From the medical personnel in the bedroom. 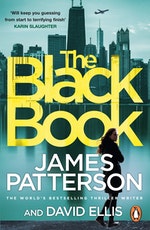 A gripping stand-alone thriller from the No. 1 bestselling author of The President is Missing