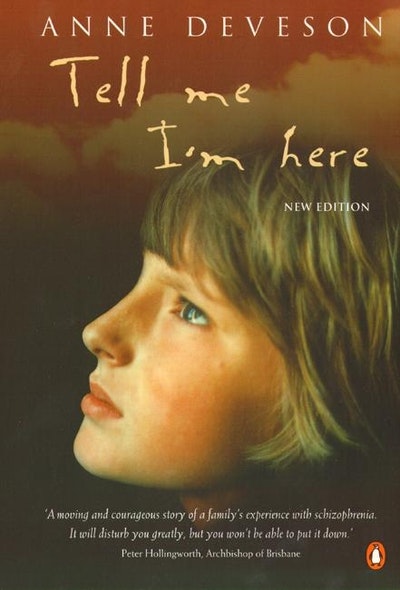 This is the compelling story of Jonathan, a charming teenager who turns into a fearful and tormented young man; it is also the heart-rending story of a mother facing the realisation that her child is going mad. First published in 1991, this book has become a classic, and is as moving and as relevant today as it ever was. This 1998 edition has been updated with a new Foreword from the author detailing the effects this book has had on society, both in Australia and worldwide; a new Afterword which discusses the advances in treatments for schizophrenia and developments in community attitudes and programs for mental illnesses in general; and a new, up-to-date section on Where to Go for Help.

Anne Deveson is a writer, broadcaster and documentary filmmaker with a long involvement in human rights issues. She was born in Kuala Lumpur; spent her childhood moving between Malaysia, Britain and Australia, then worked as a journalist for the BBC and the London bureau of the New York Times. In Australia, she became the first woman to run her own daily current affairs radio program. In 1974, she was appointed a Royal Commissioner with the Royal Commission on Human Relationships and in 1978, a founding member of the NSW Anti-Discrimination Board.

She was Chair of the South Australian Film Corporation and Executive Director of the Australian Film, Television and Radio School. She has made numerous award winning television and radio documentaries including several films in Africa and Asia which have won her three UN Media Peace Awards. In 1993 she was made an Officer of the Order of Australia for services to the media and to mental health. She also holds several honorary doctorates.

Her writing includes the internationally acclaimed Tell Me I'm Here, which won the 1991 Human Rights Award for non-fiction. She has also written Australian at Risk, Faces of Change, Coming of Age, Lines in the Sand, Resilience and Waging Peace.

The Age Book of the Year