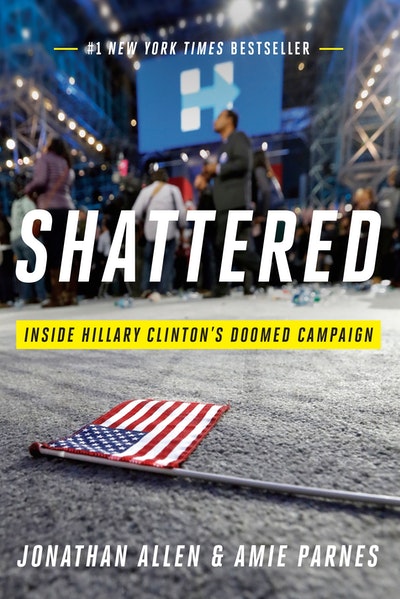 A gripping, vivid postmortem of the most shocking and bitter election struggle in history, told from inside the campaign that was supposed to win it all—by the bestselling authors of the Hillary bio HRC

It was never supposed to be this close. And of course she was supposed to win. How Hillary Clinton lost the 2016 election to Donald Trump is tragic story of a sure thing gone off the rails. For every Comey revelation or hindsight acknowledgment about the electorate, no explanation of defeat can begin with anything than the core problem of Hillary’s campaign—the candidate herself. Through deep access to insiders from the top to the bottom of the campaign, political writers Jon Allen and Amie Parnes have reconstructed the key decisions and unseized opportunities, the well-intentioned misfires and the hidden thorns that turned a winnable contest into a devastating loss.

Drawing on the authors’ deep knowledge of Hillary from their previous book, the acclaimed biography HRC, Shattered will offer an object lesson in how Hillary herself made victory an uphill battle, how her difficulty articulating a vision irreparably hobbled her impact with voters, and how the campaign failed to internalize the lessons of populist fury from the hard-fought primary against Bernie Sanders. Moving blow-by-blow from the campaign’s difficult birth through the bewildering terror of election night, Shattered tells an unforgettable story with urgent lessons both political and personal, filled with revelations that will change the way readers understand just what happened to America on November 8, 2016.

AMIE PARNES is the Senior White House correspondent for The Hill newspaper in Washington, where she covers the Obama Administration. A ten-year veteran of political journalism, she travelled with the Clinton, Obama and McCain campaigns while covering the 2008 presidential race for POLITICO. She appears frequently on MSNBC and has also been featured on CNN, Fox News and other networks.