How #socialmedia saved the home of the WWII codebreakers 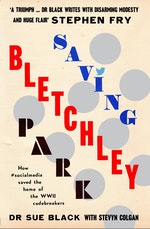 The inspirational story of the campaign to save one of Britain's most critical wartime heritage sites, and the history behind what made it a place worth saving.

Imagine a Britain without Bletchley Park, where Alan Turing and a team of code breakers changed the course of World War II and where thousands of women inspired future generations with their work in the fields of computing and technology...

Now imagine a group of extraordinary people, who – seventy years after the birth of the modern computer at Bletchley Park – used technology to spark a social media campaign that helped secure its future and transform it into the world-class heritage and education centre it deserves to be.

This is a story about saving Bletchley Park.

But it is also the story of the hundreds of people who dedicated twenty years of hard work and determination to the campaign that saved it. It is a testament to the remarkable and mysterious work during World War II that made it a place worth saving. It is a book about campaigners, veterans, enthusiasts, computer geeks, technology, Twitter, trees and Stephen Fry stuck in a lift.

And finally, it is a story about preserving the past for the generations of tomorrow.

Professor Dame Sue Black is one of the world’s leading anatomists and forensic anthropologists. Her expertise has been crucial to many high-profile criminal cases, and in 1999 she was the lead anthropologist for the British Forensic Team's work in the war crimes investigations in Kosovo. She was one of the first forensic scientists to travel to Thailand following the Indian Ocean tsunami of 2004 to provide assistance in identifying the dead. Sue is a familiar face in the media where documentaries have been filmed about her work and she led the highly successful BBC 2 series - History Cold Case. In 2015 she moved many to tears with her stories on Desert Island Discs and more recently she stunned over 300,000 Outlander followers when she announced that Lord Lovat, Simon Fraser, was not residing in a coffin built for him at the Wardlaw Mausoleum.
Sue was appointed Dame Commander of the Order of the British Empire in the 2016 Queen’s Birthday Honours for services to forensic anthropology.

Stevyn Colgan spent thirty years as a police officer. But now he's one of the writers of the award-winning TV show QI and its sister show on BBC Radio 4, The Museum of Curiosity. In A Murder to Die For he brings his sense of humour and his policing experience together to create something that is definitely not your average murder mystery.