It is January 1951, and after a year away Eleanor Webber has returned home to River Run, her family’s sprawling sheep property in western New South Wales. With the shearing of over 25,000 sheep about to commence, her half-brother Robbie running wild, a storm looming and tensions rising in the shearing shed, this is not likely to be the homecoming Eleanor was expecting…

Take a look at the questions below and get the ball rolling on your next book club discussion. 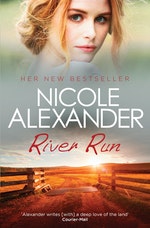 Taking place over just one week, River Run is an unputdownable rural drama from the bestselling author of The Bark Cutters and Wild Lands.