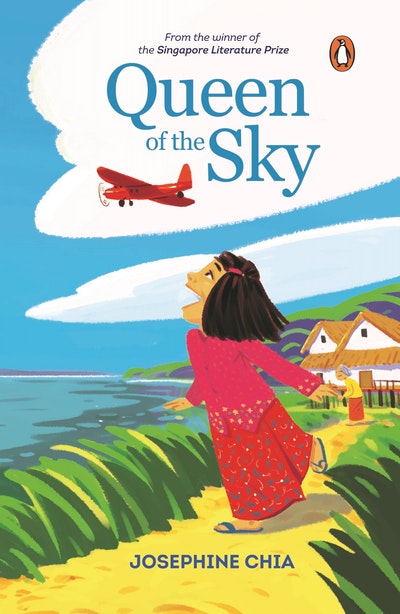 Queen of the Sky

Amelia is a modern, nine-year-old Peranakan Chinese girl. She adores her Great Grandmother whom she nicknamed GGM. GGM has lots of exciting tales to tell her about old Singapore. She takes Amelia to see the site of her old kampung, an attap-thatched village along the Kallang River where she had met Amelia’s famous namesake and aviatrix, Amelia Earhart, the historical Queen of the Sky, in June 1937. GGM is very active and does not behave like a doddering Senior. She started skiing at sixty and wants to do something adventurous for her 90th birthday.
But the entire family does not approve.

Josephine Chia is a Peranakan Chinese who was born and raised in Kampong Potong Pasir, Singapore, in the 1950s during the colonial era. Josephine is proud of her culture and heritage and loves to wear her sarong kebaya. She is mesmerized by stories and enjoys the dreamtime of writing. She has lived in the UK for more than thirty years but had returned home to live at the end of 2012. Josephine writes in English, in both fiction and non-fiction and has published twelve books.
Josephine has won literary prizes and awards both in the UK and Singapore. Kampong Spirit: Gotong Royong, Life in Potong Pasir 1955 to 1965, won the Singapore Literature Prize for Non-Fiction in November 2014. She has a BA Honours in Philosophy from Singapore University and an MA in Creative Writing from Bath Spa University, UK. She is a member of UK’s Society of Authors and Society of Women Writers and Journalists (SWWJ), and has served on the National Council of UK SWWJ to promote writing in the UK.