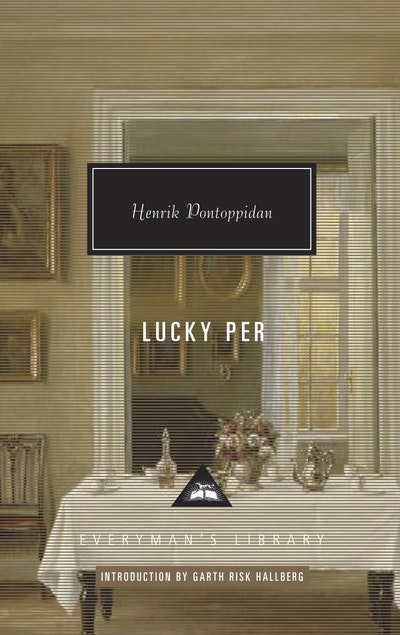 This sweeping neglected 1904 novel is a Modernist masterpiece and arguably 'the great Danish novel' – but is only newly available in English.

Social realism and fairy tale combine in Lucky Per, a bildungsroman about the ambitious son of a clergyman who rejects his faith and flees a restricted life in rural Jutland for Denmark's capital city. Per is a gifted young man who firmly believes that 'you had to hunt down luck as if it were a wild creature, a crooked-fanged beast ... and capture and bind it'. He falls in with Copenhagen's Jewish community, and falls for Jakobe Salomon, a wealthy heiress, who is not only the strongest character in the book but among the great Jewish heroines of European literature. Per becomes obsessed with a grand engineering scheme that he believes will both reshape Denmark's landscape and correct its minor position in the world. Eventually personal and his career ambitions alike come to grief. At the heart of Lucky Per lies the question of the relationship of 'luck' to 'happiness' (the Danish word in the title can have both meanings), a relationship which Per comes to view differently by the end of his life.

Henrik Pontoppidan (1857–1943) was a Danish novelist who won the Nobel Prize for Literature in 1917 for his 'authentic descriptions of present-day life in Denmark'. The son of a rural minister, he moved to Copenhagen as a young man and eventually earned his living as a journalist and writer. He is best known for the sweeping social novels he wrote between 1890 and the 1920s, which 'reflect the social, religious and political struggles of the time.'

Praise for Lucky Per

What startled its contemporaries about this strange novel was the sense of something new, one of those as yet unnamed and perhaps unnameable psychic discoveries for which the novelists of the period - from Dostoevsky to James – desperately searched... This turns out to have been the novel's project... to modify our sense of what luck or happiness means.

A full-blooded storyteller, a critic of life and society of the highest European order... Reasserts the grand style of narrative in a world short of breath.