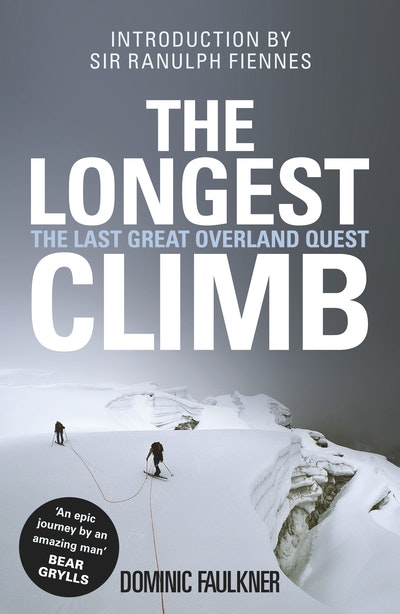 Shortlisted for the Boardman Tasker Prize for Mountain Literature 2009, the paperback edition of Dominic Faulkner's incredible journey from the Dead Sea to the summit of Everest

The Longest Climb is the utterly compelling account of Dominic and his team's expedition from the Dead Sea to the peak of Everest. His team EverestMax were the first ever to make this extraordinary journey. Following an old Victorian route, Dominic cycled through Jordan, Syria, Turkey, Iran, Pakistan and India on his way to Tibet and the bottom of the world's highest mountain.

From trying to find a wireless connection in Damascus and setting fire to the team's support vehicle in order to thaw the engine in Iran, to deciding whether or not to share the little oxygen they had and risk their own lives in order to try to save another climber, and beating their Austrian nemesis Gerry Winkler to the top, The Longest Climb is a high-octane combination of the huge personal risk, fascinating cultural insight, and momentary farce that make up a major expedition.

But The Longest Climb is not simply a memoir of an expedition. It is also the moving account of Dominic's struggle to finally accept the heartbreaking loss of his father to cancer when Dominic was just six. As he fights illness, broken equipment, lack of money and the hardest season of Everest history to make the top, Dominic also discusses what has driven him up this moutain. The answers are as affecting as they are extraordinary.

Dominic Faulkner was born in the UK but spent his early years in Nigeria and India. He spent some years with the Army and his first Everest climbing experience was as a member of the Millenium SAS team - but on that expedition he was injured and failed to summit.

In 2005 he led the EverestMax team from the shores of the Dead Sea - the lowest point on Earth - to the summit of Everest. They were the first team to make this journey and in so doing attracted worldwide publicity.