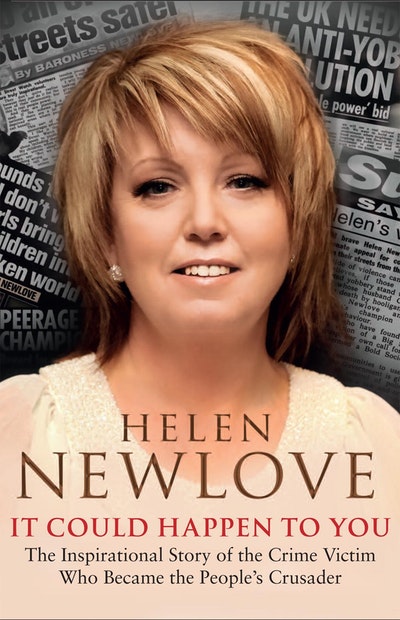 It Could Happen to You

When Helen was 20, she met Garry Newlove at a local disco. They married in 1986 and had three daughters. On 10 August 2007, Garry was brutally beaten by a gang of youths outside the family home in Warrington. He died two days later. It was an act of violence that shocked the nation and would have a profound impact on the lives of Helen and her children.

After the ordeal of a ten-week trial and the murder conviction of three youths, Helen held a press conference, giving a speech that attracted national media attention and propelled her into the role of a campaigner for victims’ rights and against the lawlessness that blights so many of our towns and cities.

In 2010, Helen was appointed a seat in the House of Lords among some of the most powerful and influential people in the country. Today, she is Baroness Newlove of Warrington, a tireless campaigner against antisocial behaviour and for the rights of victims and witnesses.

In this engaging memoir, Helen recounts how her family was shattered by Garry’s murder and how good unexpectedly came out of evil. Her remarkable story is not one of politics and committees; it is about real people and the impact that crime has on us all.

Helen Newlove was born in 1961 in Lancashire and grew up in the close community of Irlam, Manchester. Today, she is the UK government's Champion for Active, Safer Communities and has a special interest in tackling underage drinking and related antisocial behaviour, working with the Secretary of State for Communities, Eric Pickles. She co-chairs the All-Party Parliamentary Group on Victims and Witnesses and is Chair of Community Alcohol Partnerships.

Praise for It Could Happen to You