How much do you know about Shakespeare’s stomping ground?

In Nick Falk and Tony Flowers’ How To Stop an Alien Invasion Using Shakespeare, our hero Sid turns to his sister, Wendy, and evil-genius neighbour, the Mighty Professor Skeletron, for help writing the winning entry in a story competition. The solution? Giving Shakespeare a sci-fi twist! But when their story comes to life and causes an alien invasion, they have to find a way to travel back in time and change the past.

So what do you know about Elizabethan England – the time of William Shakespeare? The reign of Queen Elizabeth I (1558–1603) was a time of superstition and witchcraft, torture and executions, extreme poverty and excessive wealth, poetry and theatre. Spying was rife, laws dictated even the styles of clothes to be worn, and education was on the rise; though with a rapidly increasing population, disease rates and infant mortality hit new highs. Want to find out more about this colourful and wacky time?

Take our Quiz and discover some more FUN FACTS.

(No peeking, the answers are below.)

1) The Elizabethans didn’t know anything about germs. They thought diseases were spread by BAD SMELLS. Four of the following five things were used as medicines in Elizabethan England. Which one WAS NOT an Elizabethan medicine?
a:   Putting leeches on people to suck their blood
b:   Making people eat dried toads
c:    Wearing garlands of flowers to ward off bad smells
d:    Putting butter, onion and garlic on wounds
e:    Putting Brussels sprouts up people’s noses

2) Elizabethans, just like us, thought farting was very rude. Which one of the two things below did they think was polite?
a:   Burping after a meal to say you liked the food
b:   Picking your nose to show you weren’t hiding anything in your nostrils

3) Elizabethans thought having pale hair and skin was a sign of wealth and beauty. Which one of the four things below did Elizabethans NOT do to make themselves pale and beautiful?
a:   Bleach their hair with wee-wee
b:   Bleed themselves with leeches
c:   Cover their skin in poisonous lead
d:   Scare each other by hiding in cupboards

4) Elizabethans used to throw sewage in the streets. As a result, water in streams and rivers was often dirty and full of disease. What did Elizabethans (even the kids!) sometimes drink instead of dirty water?
a:   Wine and beer
b:   Sausage milkshakes

6) The Elizabethans were scared of witches. They blamed witches for famine, lost crops and sickness. They thought it was hard to find witches because they could turn into animals. Which of the following WERE NOT animals Elizabethans thought could be a witch in disguise?
a:   Cats
b:   Ravens
c:   Elephants
d:   Dogs

7) Elizabethans were very superstitious. Which one of the following did they believe gave you good luck?
a:   Having a cat fart on you
b:   Having a cow breathe on you
c:   Having a dog slobber on you

8) The Elizabethans were great sailors. During the reign of Queen Elizabeth I the English adventurer Sir Frances Drake sailed around the world. Why did Elizabethan sailors wear big gold earrings?
a:   So they could see each other in the dark
b:   In case they lost their wallets and couldn’t pay for tea
c:   So they could pay their way into the Underworld if they died at sea

1) e: All of the others are true. Even the one about toads! No wonder the Elizabethans hated going to the doctor!

2) a: Belching after a meal showed the chef that you were satisfied with your food.

3) d: But they did use leeches, put wee in their hair and spread lead on their skin. The lead was poisonous, and often made them very ill.

4) a: Elizabethans would often drink ale and wine instead of water so they didn’t get sick. They didn’t drink milkshakes. Even sausage ones.

6) c: The Elizabethans didn’t know much about elephants. The first elephant came to Britain in Roman times, but zoos weren’t common until the 1800s.

7) b: Elizabethans believed lots of other things were lucky too. Like spitting into a fire, or touching a man about to be executed.

8) c: It was believed that, after you died, you had to cross a river to get to the Underworld. The gold was needed to pay the ferryman to take you across the river. 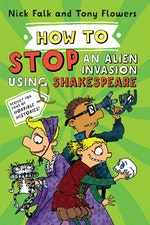 Join three friends as they dodge bullies, do their homework and alter the entire course of history in the process!