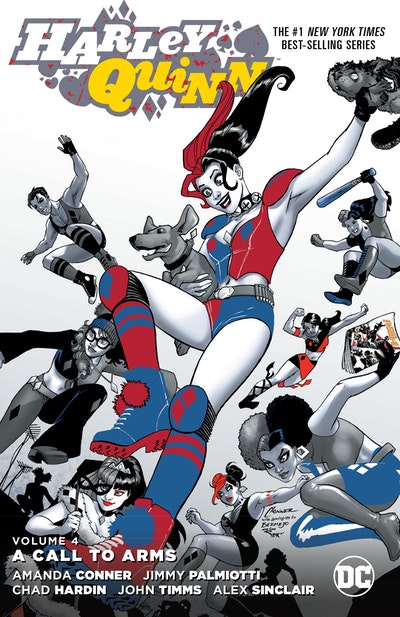 HEED THE CALL — JOIN THE GANG OF HARLEYS!

Harley Quinn is on a mission to make the world a better place...and get paid for it at the same time! Quinn and her Gang of Harleys are taking on do-gooding missions for a price, but sometimes that means they’re biting off more than even a gang of semi-sane butt-kickers can chew. So when a simple search and rescue mission turns into a battle royal against an invulnerable alien-empowered sea captain...that means it’s time for a vacation!

But no trip to Hollywood could ever be simple for Harley Quinn—she’s got a job to do, too. As she navigates a twisted web of movie producers, starlets, kidnappings and cults, Harley discovers that the bounty-hunting business can be even more dangerous than being a hero for profit...especially when you’re trying to poach a bounty from Deadshot!

Harley continues carving out her own path, with the help of guest-stars Poison Ivy and Catwoman! This collection includes HARLEY QUINN #17-21 and HARLEY QUINN ROAD TRIP SPECIAL #1, from co-writers Amanda Conner and Jimmy Palmiotti (STARFIRE) and artists including Chad Hardin (SUPERGIRL) and Brett Blevins (BATMAN: KNIGHTFALL).

"The strongest aspect of this issue is Conner's character work. Like the script, her characters are expressive in all the right ways, understated, and inherently emotional."--MTV Geek "The secret to this book's surprisingly sweet appeal is Amanda Conner."--Newsarama "[Conner's] work is so irresistibly beautiful and evocative."--Craveonline