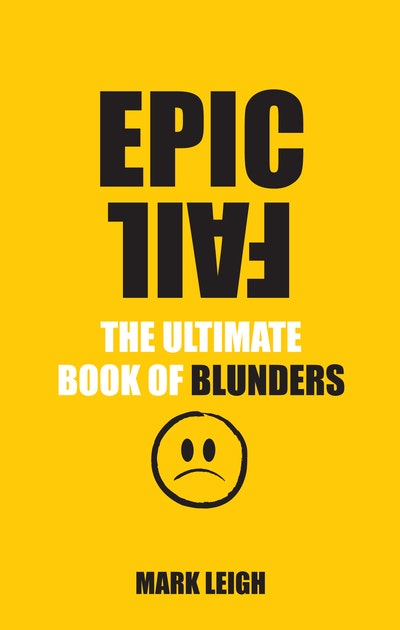 The Ultimate Book of Blunders 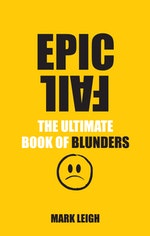 A laugh-out-loud humour book in the vein of the bestselling Darwin Awards and Stephen Pile’s The Book of Heroic Failures, collecting together stupid stories of real-life cock-ups.

Herewith a handful of sample entries to tickle your funny bones…

In the 1824 war between Britain and Ashanti (now part of Ghana), the British Redcoats found themselves surrounded by 10,000 fierce Ashanti warriors, and running very low on ammunition. Their commander ordered Charles Brandon, the army’s stores manager, to break open the reserve ammunition he’d ordered. As the Ashanti advanced Brandon began to open the ammunition boxes – only to find he had brought the wrong supplies. They were all full of biscuits.

The grandfather of film star Lana Turner owned a half share in a brand new company that had started bottling a fizzy drink. He thought the drink’s name would affect its saleability and wanted to change it – without success. In frustration and as a protest he sold his 50%. It’s a pity really because Coca-Cola became quite popular…

Italian Vittoria Luise was out driving during a fierce storm in Naples. A huge gust of wind blew his car into the River Sele. The car began to sink, but the calm motorist managed to break a window and swim to safety. He dragged himself onto the riverbank – and it was here that he was hit by a falling tree and killed.

The Times of 19 October 1986 carried the story of Emilio Tarra, a crewmember of the 1986 America’s Cup race, who was driving from Perth towards Adelaide during the Australian leg of the race. En route, his car sideswiped a kangaroo, leaving it sprawled across the road.
Tarra got out of his car and, assuming the kangaroo was dead, decided to take a novelty photograph to show his colleagues. Dressing the kangaroo up in his smart team blazer, he propped it against his car to take its photograph. As he was focusing his camera, the kangaroo, which had only been stunned, woke up and bounded back off into the bush, taking with it the jacket, which contained Tarra’s passport, $2,000 worth of cash and his credit cards.

ABOUT THE AUTHOR
Mark Leigh’s first job in an ad agency was a studio junior
at DDB. He soon realised that there was more money (and
marginally less tea-making) as an account executive
there. Despite working with clients such as Polaroid, Volkswagen,
Motorola, Volvic and Berkeley Homes, he is proud to say that he is
‘Ulcer-free’. His claim to fame is that he was once sick right in front
of the Lyons Coffee Client-yet still retained his job, if not
his dignity. Mark is now a director of AMD, the country’s
largest property marketing consultancy, based in Chelsea. If his
MD is reading this book Mark would like to point out to her that it
was written entirely in his own time.