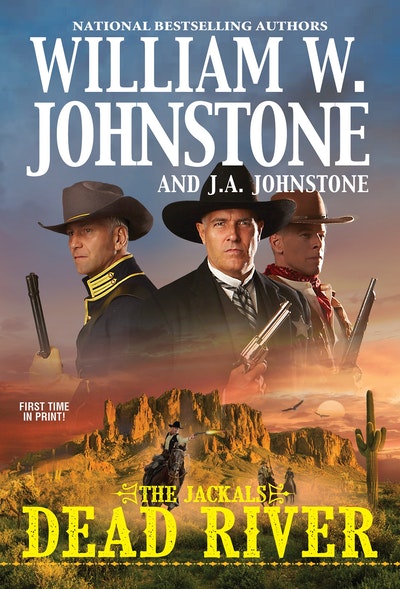 The Three Musketeers of the Wild West unleash their own brand of justice on the American frontier in the newest adventure featuring The Jackals by the legendary bestselling authors William W. Johnstone and J.A. Johnstone…

On the wild western frontier, the three men known as the Jackals stand between the law and the lawless—delivering their own brand of justice with a fast draw, dead aim, and enough bullets to populate Boot Hill.

Apache renegade Bloody Hand plays a role in each of the Jackals’ lives. To bounty hunter Jed Breen, he is man with a price on his head. To retired cavalry segeant Sean Keegan, he is a cellmate after a drunken brawl. And to former Texas Ranger Matt McCulloch, he is the key to a mystery that has long haunted him.

When McCulloch breaks Bloody Hand out of jail, his fellow Jackals follow them into Mexico. Now, all four are wanted men. The U.S. Army and bounty hunters cross the Rio Grande in pursuit. Awaiting them south of the border are Mexican rurales led by Confederate expatriate Major Block Frazer seeking revenge against Bloody Hand.

But nothing will stop McCulloch from completing his mission—to save his daughter from the Apache band that abducted her years before. Outnumbered and outgunned, the Jackals will stand together to free McCulloch’s daughter—or end up hung, drawn, and quartered.