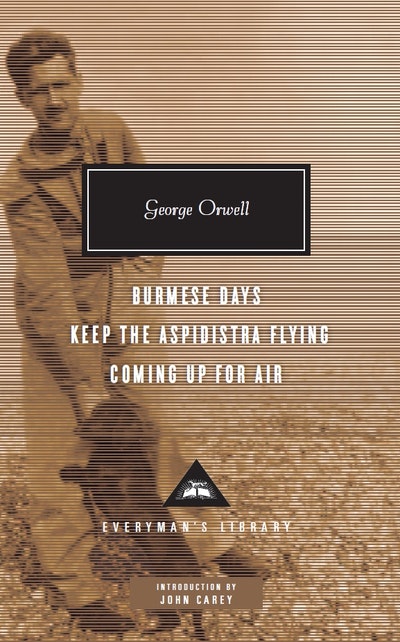 Burmese Days, Keep the Aspidistra Flying, Coming Up for Air

Three key novels from the 1930s by the author who later became world-famous for his political satires, Animal Farm and Nineteen Eighty-Four.

Orwell draws on his experience in the Indian Imperial Police for his first novel, BURMESE DAYS, a devastating indictment of British colonial rule (he resigned ‘to escape not merely from imperialism but from every form of man’s dominion over man’, as he later wrote). John Flory, cowardly and self-pitying, makes an unlikely but all-too-human tragic hero as he defies convention and prejudice to befriend an Indian doctor, then shoots himself when the girl who had seemed to promise escape from the stultifying ‘lie’ of colonial life refuses to marry him. While reporting on the dark side of the Raj, Orwell nonetheless came under the spell of the landscape of the East, and the exotic background of BURMESE DAYS inspired his most lush descriptive writing.

…Back in England, Orwell tackles capitalism, nonconformity and compromise in KEEP THE ASPIDISTRA FLYING. Youthful idealist and would-be author Gordon Comstock rebels against a life of middle-class respectability (symbolized by the aspidistra), abandoning his job with an advertising company to work part-time in a bookshop. But everything goes wrong: alternately proud and self-loathing, he lets himself sink into poverty; he is unable to write; he gets his long-suffering girlfriend pregnant. At the end, respectably married - and with an aspidistra of his own -he is back at his old firm writing copy for deodorant ads. Grimly comic – and again, written from Orwell’s own experience, this time of living in the London slums – KEEP THE ASPIDISTRA FLYING is a still-relevant commentary on society’s subservience to ‘the Money God’ and an affirmation of the power of human relationships to survive in spite of it.In COMING UP FOR AIR, George Bowling, married, mortgaged and middle aged, deals with his mid-life crisis by forsaking dull suburbia for a rural idyll. But the fondly remembered village of his childhood has been transformed by the very ‘Progress’ he seeks to escape: the estate where he used to fish has been built over; the pond turned into a rubbish dump. An old girlfriend fails to recognize him, and she herself is shockingly ravaged by time. Written in 1938-9, COMING UP FOR AIR is permeated with nostalgia for the England of a more tranquil age - before industrialization and capitalism had done their worst - and overshadowed by premonitions of what is to come – ‘the war and the after-war, Hitler, Stalin, bombs, machine-guns, food-queues, rubber truncheons’. Above all, it unsparingly confronts the failure of youthful dreams and the impossibility of ever reclaiming the past.