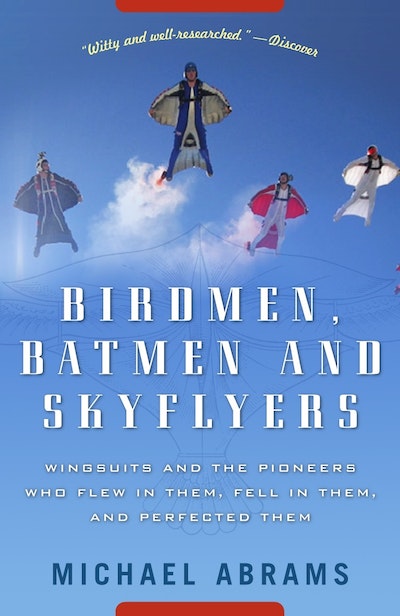 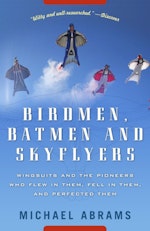 The Wright Brothers were wimps.

Or so you might think after reading this account of their unsung but even more daring rivals'the men and women who strapped wings to their backs and took to the sky. If only for a few seconds.

People have been dying to fly, quite literally, since the dawn of history. They've made wings of feather and bone, leather and wood, canvas and taffeta, and thrown themselves off the highest places they could find. Theirs is the world's first and still most dangerous extreme sport, and its full history has never been told.

Birdmen, Batmen, and Skyflyers is a thrilling, hilarious, and often touching chronicle of these obsessive inventors and eccentric daredevils. It traces the story of winged flight from its doomed early pioneers to their glorious high-tech descendants, who've at last conquered gravity (sometimes, anyway). Michael Abrams gives us a brilliant bird's-eye view of what it's like to fly with wings. And then, inevitably, to fall.

In the Immortal Words of Great Birdmen...

'Someday I think that everyone will have wings and be able to soar from the housetops. But there must be a lot more experimenting before that can happen.' –Clem Sohn, the world's first batman, who plummeted to his death at the Paris Air Show in 1937

'The trouble was that he went only halfway up the radio tower. If he had gone clear to the top it would have been different.' –Amadeo Catao Lopes in 1946, explaining the broken legs of the man who tried his wings

'One day, a jump will be the last. The jump of death. But that idea does not hold me back.' –Rudolf Richard Boehlen, who died of jump-related injuries in 1953

'It turned out that almost everyone from the thirties and forties had died. That just made me want to do it more.' –Garth Taggart, stunt jumper for The Gypsy Moths, filmed in 1968

'You have to be the first one. The second one is the first loser.' –Felix Baumgartner, who in 2003 became the first birdman to cross the English Channel

Michael Abrams is a writer based in New York City who has written for Discover magazine, Wired, and Forbes FYI among other publications. He has jumped out of a plane twice, neither time with wings.

Praise for Birdmen, Batmen, And Skyfliers

““A joyous, quirky, witty, totally inspiring book about falling through the air and dying. Abrams has captured the lunatic passion of these birdmen with so much insight and intelligence and infectious enthusiasm that risking your neck to fly through a cloud with your arms outstretched no longer seems unreasonable.” —Mary Roach, author of Stiff and Spook”