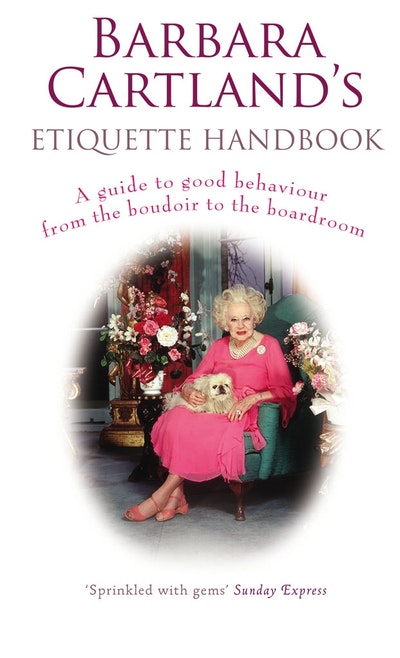 A Guide to Good Behaviour from the Boudoir to the Boardroom

Full of charm and wit, Barbara Cartland'sEtiquette Handbook is as delightful now as when it first appeared in 1962

'For the record, the word "parlour" is not used, nor is the relatively recent insidious "lounge", except about airports, hotels and liners.'

'Boys should be taught at a very early age - six or seven - to say "Sir" to an older man.'

'When there are servants, the plates for the first course are never put on the table until everyone is seated.'

'I cannot stress too often that on every formal occasion, whether it is Luncheon, a Bazaar or a Meeting, a hat should be worn.'

Written nearly 50 years ago, Barbara Cartland'sEtiquette Handbook conjures up a period when addressing work colleagues by their first names was frowned upon, wives could expect to receive a weekly allowance of five shillings from their husbands, and hats were ubiquitous. Laced throughout with Barbara Cartland's wit and wisdom, and Francis Marshall's illustrations, this is a wonderfully evocative insight into the manners of an England that has largely disappeared.

Barbara Cartland (1901-2000) was a prolific author of romance novels, selling over 1,000 million books in her lifetime, which earned her a place in The Guinness Book of Records. She wrote a total of 723 books of which 657 were novels; her books have been translated into 37 different languages. Amazingly, 400 of her romances were written during the last 20 years of her life and, at her death, she left an unprecedented 160 manuscripts, which are now being published on the Internet as the 'Barbara Cartland Pink Collection', as well as in translated editions. Although best known for her fiction, she also wrote several biographies, including one of her brother Ronald Cartland, the first Member of Parliament to be killed in the Second World War. She had an active political life and served for nine years as Councillor for Hertfordshire County Council, campaigning for nursing home reform and salary improvement for midwives; she was also awarded the Bishop Wright Air Industry Award for her work in aviation. Barbara Cartland was made a Dame in 1991 for her contribution to literature and her work for the community.

It might be the saving of us all ...it's easy to tease about a book written for another age but when you look at our society today, you can' t half suspect that she was, on the whole right.