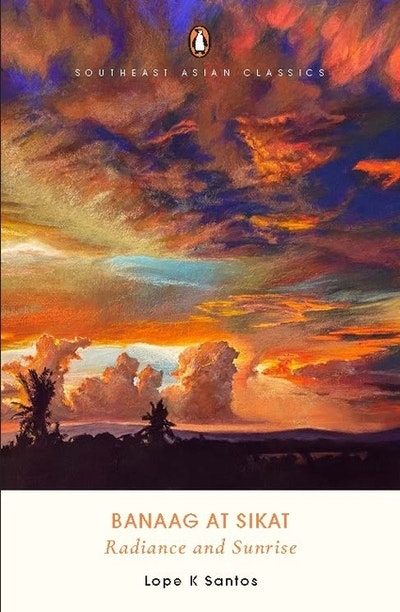 Banaag at Sikat (Radiance and Sunrise)

Lope K Santos’ novel, Banaag at Sikat, is a love story framed as a political tale. Published in 1906, it was later hailed as Asia’s first proletariat novel. It revolves around Delfin, a poor man in love with Meni, a capitalist’s daughter. Delfin is a socialist while Felipe, his friend, is an anarchist.
Delfin wants the citizens to have more rights in business and property relations. He believes that society could be changed through education.
On the other hand, Felipe believes in tearing down society’s walls. Factories should be owned by those who work there and land owned by those who till it. Banaag at Sikat mirrors the clash of forces during the American empire in the Philippines. Its burning passages on race, class, and colonialism still resonate today. Translated by ‘one of Asia’s best writers’, it is hoped that this modern rendering will inspire new readers to shape their lives so they ‘can help change the world’.
'Remoto is one of Asia’s finest bilingual writers. In this book, he renders Banaag at Sikat in a fluent and contemporary English that introduces this Tagalog classic to new generation of global readers.’
-Dr Bienvenido Lumbera, National Artist of the Philippines, Winner of the Ramon Magsaysay Award for Literature, Asia’s Nobel Prize
‘Lush, limpid and lean, Danton Remoto is a stylist of the English language. Read him.’
-Bernice Reubens, winner of the Man Booker Prize for the novel, The Elected Member

Lope K. Santos was a Filipino Tagalog-language writer and former senator of the Philippines. He is best known for his 1906 socialist novel, Banaag at Sikat and for his contributions for the development of Filipino grammar and Tagalog orthography.
Santos pursued law at the Academia de la Jurisprudencia then at Escuela Derecho de Manila (now Manila Law College Foundation) where he received Bachelor of Arts degree in 1912. In the late 1900s, Santos started writing his own newspaper Ang Kaliwanagan. This was also the time when socialism became an emerging idea in world ideology.
In 1903, Santos started publishing fragments of his first novel, Banaag at Sikat on his weekly labor magazine Muling Pagsilang (The Rebirth) and was completed in 1906. When published in book form, Santos' Banaag at Sikat was then considered as the first socialist-oriented book in the Philippines which expounded principles of socialism and seek labor reforms from the government. The book was later made an inspiration for the assembly of the 1932 Socialist Party of the Philippines and then the 1946 group Hukbalahap.
In the early 1910s, he started his campaign on promoting a 'national language for the Philippines', where he organized various symposia, lectures and headed numerous departments for national language in leading Philippine universities. In 1910, he was elected as governor of the province of Rizal under the Nacionalista Party. In 1918, he was appointed as the first Filipino governor of the newly resurveyed Nueva Vizcaya until 1920. Consequently, he was elected to the 5th Philippine Legislature as senator of the twelfth senatorial district representing provinces having a majority of non-Christian population.
In 1940, Santos published the first grammar book of the 'national language', Balarila ng Wikang Pambansa (Grammar of the National Language) which was commissioned by the Surian ng Wikang Pambansa (SWF). The next year, he was appointed by President Manuel L. Quezon as director of SWF until 1946. When the Philippines became a member of the United Nations he was selected to translate the 1935 Constitution for UNESCO. He was also appointed to assist for the translation of inaugural addresses of presidents Jose P. Laurel and Manuel A. Roxas.

Praise for Banaag at Sikat (Radiance and Sunrise)

-Dr Patricia May B Jurilla Tagalog, Bestsellers of the Twentieth Century: A History of the Book in the Philippines

‘Lope K Santos’ Banaag at Sikat was the most important Tagalog novel of the early 20th century. Avidly read by the intellectuals and the masses, it influenced the workers to fight for economic, social, and political reforms. It became a Bible for the working men and women of the Philippines.’

-Professor Teodoro Agoncillo, author of A History of the Filipino People; National Scientist of the Philippines

‘The vigour and charm of style of Banaag at Sikat never fails. Santos knows how to sustain interest: he lets his people move and speak in a manner the reader can easily identify with. He knows the folk—both of his novel and his audience. He knows perfectly their mores, their ways of thinking, their vices and especially their language. The novel is rich in folk wisdom and homilies, which give added charm and character to this Tagalog classic.’

-Romeo P. Virtusio, Award-winning writer of Bilibid: Beneath the Prison Walls and Padre and Other Short Stories

‘In Banaag at Sikat, Lope K Santos succeeded in condensing the whole spiritual history of the Filipino ilustrado (‘the enlightened or educated ones’). . . The novel is a true exemplar of revolutionary art.’

'Remoto is an accomplished writer whose fiction is marked by elegant and intense language. I am also impressed by the social concern in his writing, wrought well in images so clear it is like seeing pebbles resting at the bottom of a pond.’

‘Danton Remoto can capture curves of feeling and shapes of thought in both English and Filipino. His language is chiseled and lapidary. His structure is musical in its control and tonality. His eye and ear are perfect.’

‘Danton Remoto is a smart and sensitive writer whose works ask many questions about our complex and colourful country.’

-Jessica Hagedorn, Shortlisted for the National Book Award for the novel, Dogeaters

‘Danton Remoto is an outrageously good writer. He writes with substance and style and he knows history—the context that shapes fiction—like the lines on the palm of his hand.’

-Carmen Guerrero Nakpil, Author of Heroes and Villains and Myself, Elsewhere, Winner of the South East Asia Write Award

‘Danton Remoto is such a wonderful writer. His books deal with the tropical Catholic magic that saves and destroys.’

-Tiphanie Yanique, Winner of the American Academy of Arts and Letters Award and the Flaherty Dunnan Prize for the novel, Love and Drowning

‘Danton Remoto is a poet, fiction writer, translator and journalist—one of the finest in South East Asia. He shows depth of feeling and great skill in his works. But I am also impressed by his compassion for the weak, the poor, the suffering in his books. He is a writer who cares.’

‘I like the passion and the intensity in the fiction of Danton Remoto. Most importantly, I like the fact that he writes with heart—which is the only way to write.’

-Bienvenido N. Santos, author of Scent of Apples and Other Stories Winner of the American Book Award