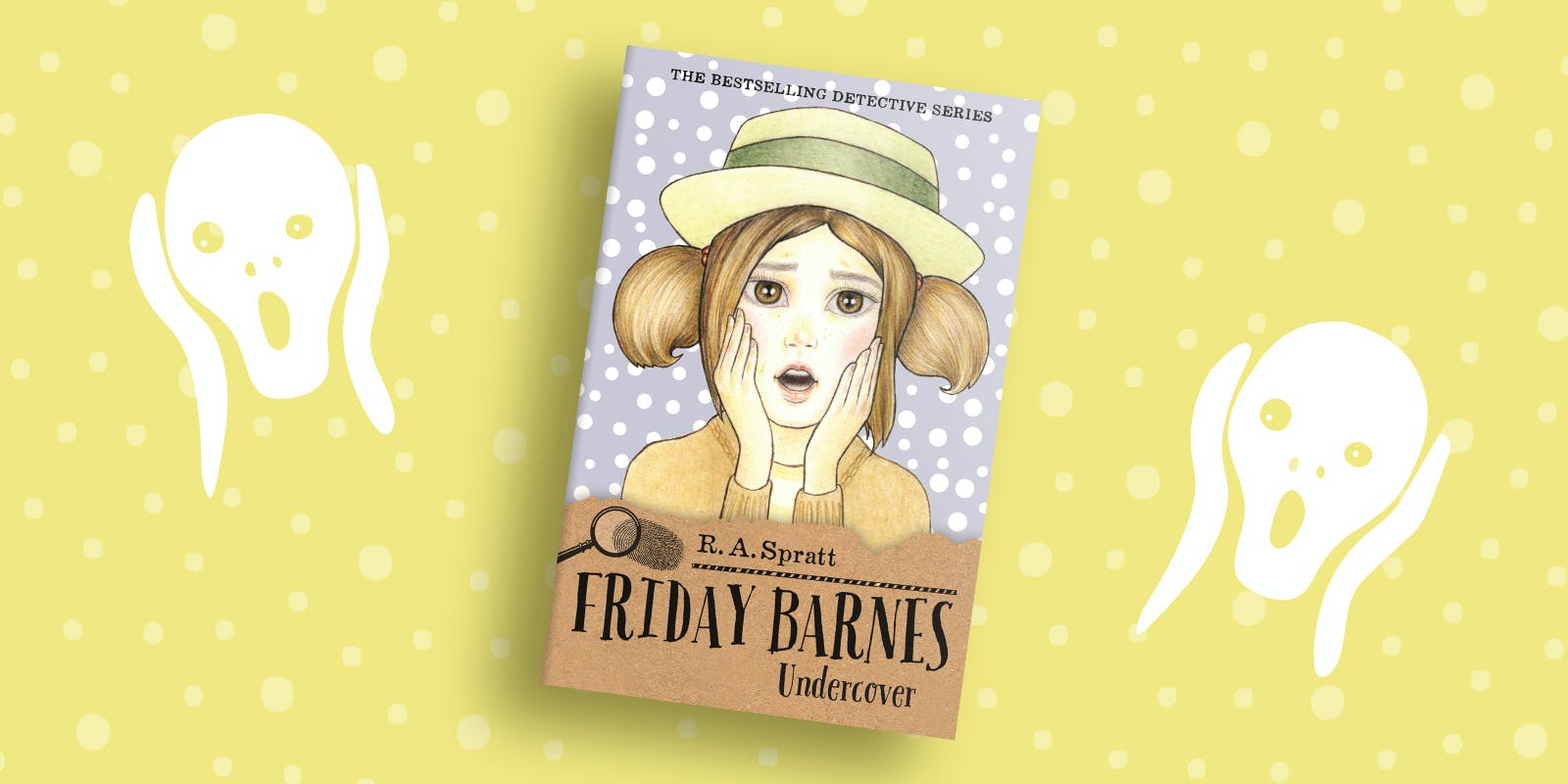 The highly-anticipated tenth book in the Friday Barnes series is coming, with our favourite young detective on her latest mystery-solving adventure to Norway and beyond.

The cover of the new book encapsulates the intense journey Friday embarks on in the latest story, according to author R.A Spratt, who has revealed the process behind creating the concept.

Spratt wanted Friday to mimic the iconic pose in Edvard Munch’s The Scream, to illustrate her overwhelming feelings of being amongst nature in Norway and, of course, having to solve another mystery.

‘I needed a cover that was a close-up of Friday’s face,’ Spratt says.

‘I thought, the book is set in Norway and The Scream is from Oslo.’

Spratt had her daughter imitate the pose to create a first sketch of the cover, turning to another iconic recreation of the pose — the film poster for Home Alone.

Spratt says The Scream was the ultimate inspiration for the latest book cover, as it captured the same themes she wanted to express in the latest story.

‘In The Scream, he is standing on a bridge and it is as if he emotionally heard the scream of nature at sunset,’ she says.

‘It’s about being overwhelmed by life and nature and the scream of existence. Friday is dealing with a lot of stuff in this book and it gets pretty intense.

‘She goes to Norway; the nature is overwhelming — she’s in an arctic climate with polar bears, so there is a lot to scream about.’

All covers in the Friday Barnes series feature a close-up of the young detective’s face, which jumps out from the shelves and signals the mystery and challenges within each book.

‘We always try to come up with something physically dynamic,’ Spratt says.

‘The cover with the binoculars, the one with the glass to the wall — these things will occur in the book at some stage.

‘Then we have the covers where she’s climbing a ladder or holding a torch to her chin — there’s always a big action scene and a high-stakes scary moment and we really try to capture that. You get the character and who she is and we try to create an exciting moment to give a sense of what the book is about.’

In the latest book, Friday Barnes 10: Undercover, the young detective embarks on an adventure to help Binky, who may or may not have been attacked by a polar bear.

He’s facing court martial for dereliction of duty and Friday has to drop everything and travel 3000 kilometres to solve the case.

But when she arrives in Oslo, she discovers Binky’s is just one of many cases she has to crack.

Spratt says writing the book did not come without its challenges, with Covid lockdown preventing her from exploring the setting of the story as she otherwise would.

‘The last book I wrote was set in Italy. I had just been there and could go to the places I wanted to incorporate in the book,’ she says.

‘With this book, I couldn’t go to Norway, but I wanted to have a real sense of what it was like physically.

‘I used Google Maps to “walk” up and down the streets of Oslo, and at one point, Friday gets a helicopter, so I used satellite imagery to see what you would see above Norway. It’s a unique landscape because of the fjords formed by glaciers and it is very dark. Until you see the images for yourself you can’t describe it to a reader.’

Spratt’s thorough research included topics like the aurora borealis, looking into the cause behind the phenomenon and accessing eight hours of uninterrupted footage on YouTube.

‘It is weird to research a book set in a country I haven’t been to and do justice to its spectacular and unique landscape, but if you want to vicariously travel to Europe, this book is for you,’ she says.

Spratt says the latest book in the series took her three months to write.

‘My process is always much the same in the way I plan. I do a big wheel chart of the action and plot, which takes about two weeks, then I write up an outline and methodically work through that and write the book.,’ she says.

Over the series, Spratt has taken the mystery out of the Highcrest Academy to Europe, where she has introduced secrets and suspense to the world of art.

While writing the series, Spratt doesn’t just focus on the main mystery, but also many small puzzles and riddles along the way.

‘I always work backwards. The hard part is coming up with the twist, but you work out the big one and then work backwards to lay out the clues that get you to that point,’ she says.

‘You have to make sure you’re doing the plotting properly and not being too obvious about it, but sometimes, because you know where you’re going, the clues can feel too obvious.

‘You just have to have faith in yourself and remember when you’re plotting you’re just giving breadcrumbs that lead the reader through the forest.’

Friday Barnes 10: Undercover will be released in February.

Trouble on the Arctic tundra!