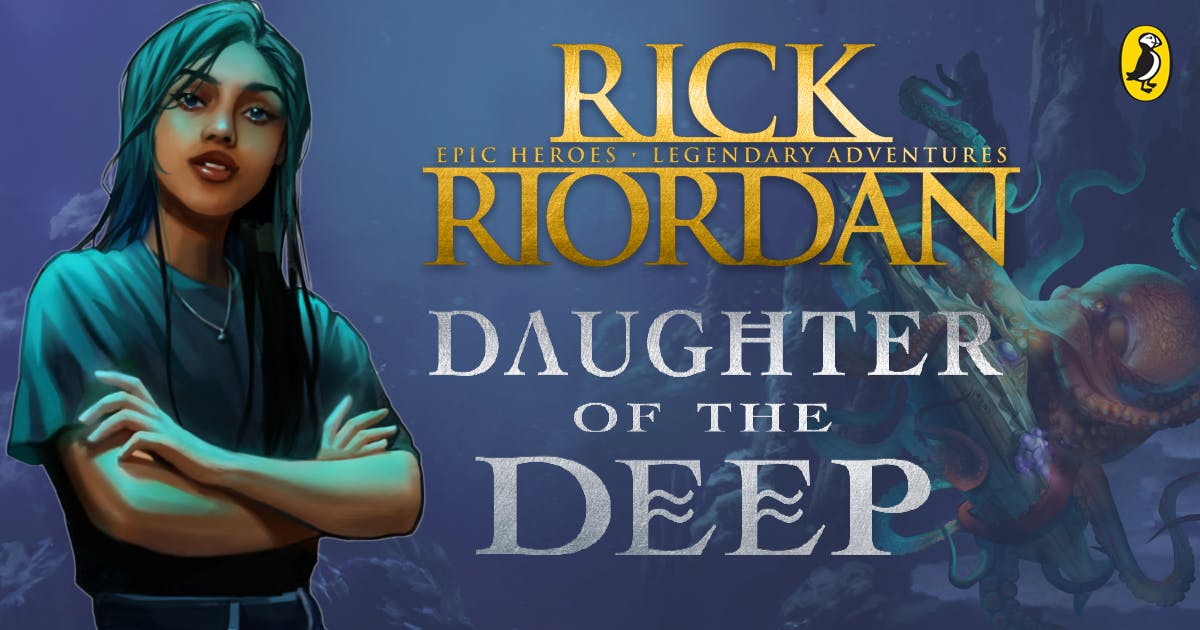 Which Harding-Pencroft House do you belong to?

Take the aptitude test to find out!

Are you House Shark, Dolphin, Cephalopod or Orca?

In Rick Riordan’s exhilarating new book, Daughter of the Deep, you’ll deep-dive into the action-packed world of freshman Ana Dakkar and her classmates at the mysterious (and downright fishy) Harding-Pencroft Academy.

Harding-Pencroft is responsible for training some of the best young marine scientists, naval warriors, navigators and underwater explorers of the world. Their gifted students are divided into four marine Houses based on their unique skills and talents.

Take a deep breath and choose wisely, young thalossophile. Your specific skills will be put to the test at this school!

What role do you play in your friendship group?

a) The organiser. If you’re the admin of any WhatsApp group, this is probably you.

b) The advice-giver. Your friends regularly come to you to talk things through. You’ve got wisdom beyond your years.

c) The follower. You’re a little fish in a big pond, but you’re happy to just keep swimming.

d) The leader. You’re the face and muscle of the group. Your shiver knows it (again, you’ll learn that one at Harding-Pencroft), too.

Pick a subject to study at university.

If you could be reincarnated as any animal, what would it be?

You find out that your best friend has been lying to you about something important. What do you do?

a) Follow the lead and investigate this treachery further – they’ll never know!

b) Tell a mutual friend and come up with a solution together.

c) Let it go and keep it to yourself; sometimes the truth is worse.

d) Confront them face-to-face and demand an answer.

You’re walking along the beach and notice a group of troublesome teens disposing plastic bottles in the ocean’s waves. What do you do?

a) Pick up their bottles without them seeing you.

b) Talk to them face-to-face about the world’s plastic pollution problem. This is ignorance that just needs educating.

c) You’re not the confrontational type. Perhaps there’s something you can do to help the world’s plastic problem on a larger scale?

d) Run into the sea, pick up the empty bottles and chuck them at those litterers! Give them a taste of their own medicine . . . and then some.

You’re cycling home and suddenly your bike starts to wobble. Uh-oh! The chain has come off your bike! What happens next?

a) You calmly bring the bike to a safe stop and then research how to reattach the chain on your smartphone.

b) You crash the bike and injury your knee. Luckily, you know first aid.

c) Bring the bike off the road and reattach the chain – you could do this with your eyes closed, to be fair.

d) First things first – get off that bike! The last thing you need is an injury. You judo roll right off that rickety thing and look slick doing it.

Which of these are you most afraid of?

a) Losing your memory – that big brain of yours is your biggest weapon; without it you are defenceless.

b) Heights – your feet belong on the ground with most of the world’s humans and animals. You’re happy to stay grounded and leave the thrills to the thrill-seekers.

c) Socialising – it’s exhausting sometimes, isn’t it? You’d much rather be hanging out on your own or with your nearest and dearest.

d) Failure – whether it’s a harmless game of Among Us or a life-changing competition, you crave success. Failure is not an option.

Pick a magic power to possess.

b) The power to heal the sick or wounded.

c) Telekinesis (the ability to move things with your mind).

Which of the following global problems do you care about the most?

a) The health of the world’s oceans.

What is your favourite way to enjoy a day on the water?

a) Snorkelling along coral reefs.

b) Collecting rubbish from waterways.

Congratulations, you’re House Dolphin! You are one of the ocean’s rare gems. Some of Harding-Pencroft Academy’s  best and brightest have excelled in House Dolphin. You’re intelligent, secretive and an expert communicator – you’ll be surprised how far those talents go behind the gates of Harding-Pencroft, and, in turn, at the deepest depths of the ocean floor. Dive in, Dolphin – you’re needed.

Congratulations, you’re House Orca! You’re a rare breed. Orca’s are some of the sea’s deepest thinkers – and so are you. You’re socially savvy, thoughtful and play the peacemaker in negotiations because you know how to stay calm under pressure. Orcas are natural healer s with brains as big as their hearts; they care deeply and selflessly about the living things that surround them – coveted qualities on land and below.

Congratulations, you’re House Cephalopod! Some brilliantly brainy creatures make up the deep’s cephalopod family, such as the spuid and the octopus, and from the looks of things your big brain will fit right in. You might be the quiet type, but that’s only because your magnificent mind is working overtime; you are analytical, innovative and love nothing more than using your hands to quietly create and problem-solve. Your handiwork will come in, well, handy, at this school.

Congratulations, you’re House Shark! Saving the world’s oceans requires brains and brawn and as a perfect candidate for House Shark, you know how to use both to your advantage. Just like a shark itself, you’re not afraid to defend yourself, but you’re more than just bite, aren’t you? Your bark is just as powerful. Be careful of that pride, though; they say it’s the deadliest of the Seven Deadly Sins.

Daughter of the Deep Rick Riordan

Print your own legendary Magnus Chase and Percy Jackson bookmarks.

Decorate some Easter biscuits with Bluey and Bingo

Test your grammar with this fun DK activity pack!

Feel prepared for the school year with this maths activity pack!

Join Bluey and Bingo on their trip to Hammerbarn!

Colour in the Heeler sisters

Bluey and Bingo need the help of your colouring pencils!

It's a Bluey Christmas colouring page

Let's go camping with the Heelers!

Based on the book and episode, Christmas Swim.