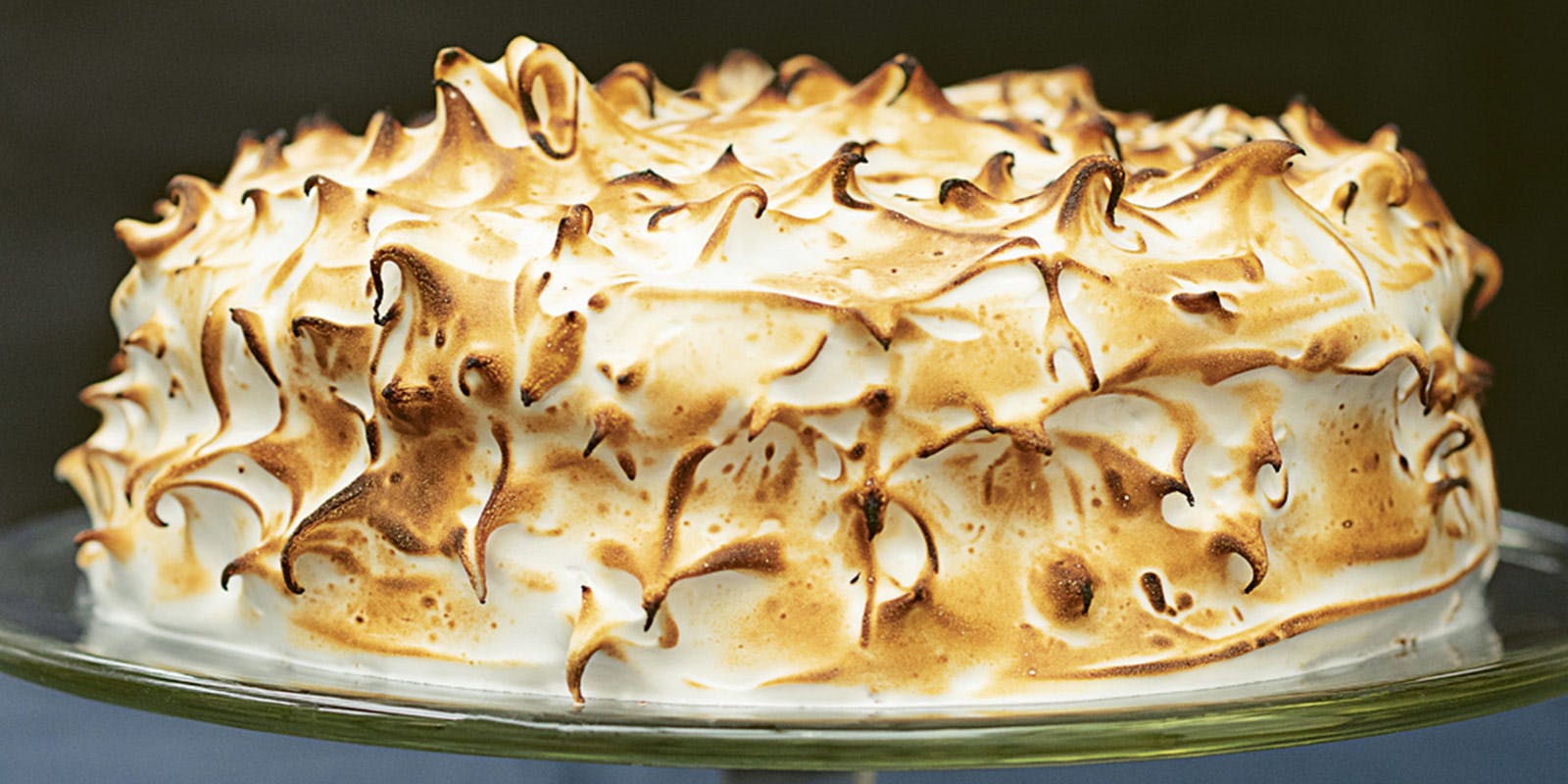 This is a relatively new addition to my rhubarb repertoire, but it has been heavily in rotation ever since I first made it nearly two years ago. Anyone who has a birthday when the forced pink rhubarb is in season gets it (and I do even have alternatives for those dim days when it isn’t, and I’ll get to them later). It is splendidly celebratory, but not dauntingly difficult. You need a bit of elbow grease and a blowtorch; I can’t tell you how much I enjoy teasing out the snowy spikes of marshmallow-meringue and then scorching them. Actually, I positively exult in it: the very act of making this feels like a jubilant part of the celebration itself. And I thank cake consigliere Stella Parks, who, in the pages of her compendious BraveTart: Iconic American Desserts, provided the hand-holding inspiration for the marshmallow icing. You do need to be prepared to whisk the whites until truly thick, but if you have a mixer, this does most of the work. The yolks are used to make two tender and celestially light golden sponges, and the rhubarb that goes between them provides its emphatic tang, offsetting the intense sweetness of the marshmallow icing.

Out of forced-rhubarb season, I favour a mixture of raspberries and redcurrants: 300g of the former and 100g of the latter. I put them into a small saucepan with 1 tablespoon each of caster sugar, undiluted elderflower cordial and water, and warm them over low heat with a lid on for 3 minutes, or until the juices start to run, then give them 2 minutes with the lid off, before transferring them to a dish to cool. If you want to use just raspberries, straight from a punnet, uncooked, you may, and you won’t need many, but you should mash some with a fork – leaving a generous handful whole – before topping the marshmallow layer that sandwiches the cake with them. When I make the original rhubarb version, I like to bring a bowl of roast rhubarb or rhubarb compote, however you like to think of it, to the table for people to spoon onto their cake plate, but I don’t regard it as obligatory; when I do the raspberry version, I regard extra berries on serving as non-negotiable.

While I have made the cake in its entirety the evening before when there has been no alternative, I prefer not to. The icing certainly keeps the cake airtight, but the potential for drippage and slippage overnight is just too tense-making. I haven’t had any disasters yet, but feel it’s only fair to warn you that it is a risk. The cakes, on their own, if made in advance will become both too dry and too frangible.

It’s not for me to tell you how to do your birthday candles, should you be making this for just such a celebration, but I favour a single black candle stuck into a plain white holder. It’s hard to make birthday candles chic – and I’m not saying they should be – but this does it; besides, there is no point interfering with the sumptuous vulgarity of the cake itself.

One last – important – comment: since you will be blowtorching this cake, it is imperative that the cake stand you put it on is heatproof.

FOR THE RHUBARB LAYER

1. Start by cooking the rhubarb. Heat the oven to 200°C/180ºCFan. Cut the trimmed rhubarb ribs into 5cm lengths if slender, 2½cm if chunky. Put into an ovenproof dish in which they will be able more or less to sit in a single layer – I use a 20 x 26cm Pyrex dish – and sprinkle over the 100g of sugar. Mix together with your hands, leaving the rhubarb in a single layer, as much as possible, then cover the dish with foil, sealing the edges well, and cook in the oven for approx. 30 minutes until the rhubarb is tender, but still holding its shape.

2. Remove the foil, and leave the dish of rhubarb out on the counter, watching it glow ever more pink as it cools. Turn the oven down to 170°C/150ºC Fan. Line the bottoms of two 20cm loose-bottomed sandwich tins, and lightly grease the sides.

3. Separate the eggs, dropping the whites into a large mixing bowl or bowl of a freestanding mixer (whichever bowl you’re using should be thoroughly washed and grease-free) and the yolks into another. Cover the bowl of whites with food wrap, and put to one side while you mix and bake the cake.

4. Finely grate the zest of the lemon and add to the bowl of yolks. Measure out the milk, juice the lemon and add 2 tablespoons of juice to the milk, and leave to stand for a mo. Mix together the cornflour, flour, baking powder, bicarbonate of soda and salt, and set this aside for now, too.

5. Add the 150g of sugar and the oil to the yolks and whisk on medium-high speed for 3 minutes, by which time the mixture will be rich, gleaming and billowy. Actually, it looks rather like a glorious mayonnaise.

6. Still whisking, but slightly more slowly now, gently pour and scrape in the now curdled milk and, once it’s in, carry on whisking until combined; the mixture looks like custard at this stage. Finally, whisking more gently now, gradually spoon in the dry ingredients. Once in, use a spatula to scrape down the sides, and fold everything gently together, before dividing the airy mixture between the prepared tins.

7. Bake for 20–25 minutes, by which time the cakes will have risen up extravagantly, the tops a golden brown; they will feel soft and puffy to the touch, but a cake tester should come out clean. Remove to a wire rack and let the cakes cool in their tins for 15 minutes – sinking a little as they do so – before very carefully turning out. You’ll need to loosen the edges with a small offset spatula first. These are tender sponge, so don’t rush or be rough. Once unmoulded, gently pull back and remove the lining papers straightaway.

8. When the cakes are completely, completely cold – which will take about an hour – you can get on with the icing. But first, tear off four strips of baking parchment, scrunch them, then unscrunch them and lay them flat to make the outline of a square on top of a cake stand. (This is to stop you covering the cake stand with sticky marshmallow icing later. It may sound a faff, but I wouldn’t advise you to leave out this step.) Place one of the cakes on it, top-side down, the paper strips under the edges. Also, now’s the time to lift the rhubarb pieces out of their syrup in the tin and on to a plate.

9. So, to the icing: get out a tall pan that you can sit your big bowlo’ whites on (without the bottom of the bowl touching the water) and heat a little water in it until just about to come to a simmer. Mix the 350g of sugar, the salt and the cream of tartar (or lemon juice) together and add to the egg whites. Then sit the mixing bowl on top of the pan, so it’s gently warmed by the barely simmering water underneath and, just using a balloon whisk (thoroughly washed and grease-free, again), keep whisking for 3 minutes, to dissolve the sugar. I couldn’t say this is hard to do, but you can really feel it in your forearm. I’m always grateful when my 3-minute timer goes off.

10. Once the sugar’s dissolved and you have a smooth opaque mixture that's warm to the touch, remove the bowl from the saucepan. Whisk at high speed for 5 minutes in a freestanding mixer, or for 6–7 minutes if using an electric handheld whisk, by which time the whites will be very, very thick and ludicrously voluminous. Whisk in 1 teaspoon of the vanilla extract, and when it’s incorporated, whisk in the remaining teaspoon, then give a good fold by hand to make sure every bit is mixed in.

11. Dollop a generous amount of marshmallow icing on to the waiting cake, and smooth right to the edges, so that you have a layer about 1cm thick: this should use about a quarter of the icing. Cover this with the rhubarb, though leave about ½cm perimeter around the edge; I go slowly here, using a couple of dessert spoons to ferry the rhubarb to the cake. And you might want to tilt the rhubarb plate away from you slightly as you transfer the slices, to make sure you leave any pooling liquid behind.

12. Top with the second cake, right way up, and use just under half the icing left in the bowl to cover the top, going just beyond the edges. Then carefully spread the rest of the icing thickly around the sides – leaving a tiny bit in the mixing bowl – until the whole cake is completely covered. Now for the really fun part: dip your fingers in the bit of icing left in the bowl and then dab the top and sides of the cake, lightly pulling up and teasing out spikes of marshmallow icing; I feel like an ’80s hairdresser doing this. Bear in mind that sometimes, as you do the sides, you will pull bits of the icing off, leaving a hole, but don't panic, just pat it back on. Gently pull out the strips of paper from beneath the cake and discard, then seal the bottom of the cake with any remaining icing should you need to. Then, slightly dampen a piece of kitchen towel with cold water, and rub off any stray bits of icing or sugar smear from the plate.

13. Take the cake somewhere you can kindle fire safely. Light a blowtorch and, holding it fairly near the cake and with not too timorous aflame, toast the top and the sides of the icing.

14. I find this cake easiest to slice if left to stand for a couple of hours before serving. And you need to slice generously, as with all layer cakes.

'More than just a mantra, "cook, eat, repeat" is the story of my life': A brilliant new book from Nigella Lawson featuring narrative essays about food, over 150 new recipes and 50 beautiful colour photographs

Chicken in a pot with lemon and orzo

This is not exactly the same as perhaps the most precious recipe in my repertoire, My Mother’s Praised Chicken, which found a home in my eighth book, Kitchen, but it owes a lot to it. A family favourite, it’s a simple one-pot dish which brings comfort and joy, and it is my pleasure to share that with you.

A rich and intense recipe for this classic British dessert from Nigella Lawson's At My Table.

This ginger-spiked carrot cake from Nigella Lawson’s At My Table is perfect for teatime or dessert.

Gemelli with anchovies, tomato and mascarpone

A creamy, tangy pasta dish from Nigella Lawson's At My Table that's so easy to make.