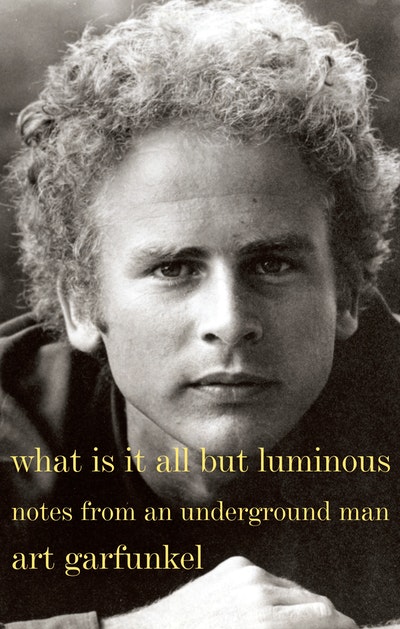 From the golden-haired, curly-headed half of Simon & Garfunkel, a memoir (of sorts)—moving, lyrical impressions, interspersed throughout a narrative, punctuated by poetry, musings, lists of resonant books loved and admired, revealing a life and the making of a musician, that show us, as well, the evolution of a man, a portrait of a lifelong friendship, and a collaboration that became the most successful singing duo in the roiling age that embraced, and was defined by, their pathfinding folk-rock music.

From the golden-haired, curly-headed half of Simon & Garfunkel--a memoir (of sorts): artful, moving, lyrical; the making of a musician; the evolution of a man, a portrait of a life-long friendship and collaboration that became one of the most successful singing duos of their time.

Art Garfunkel writes about his life before, during, and after Simon & Garfunkel . . . about their folk-rock music in the roiling age that embraced and was defined by their pathbreaking sound. He writes about growing up in the 1940s and '50s (son of a traveling salesman), a middle class Jewish boy, living in a red brick semi-attached house in Kew Gardens, Queens, a kid who was different--from the age of five feeling his vocal cords "vibrating with the love of sound" . . . meeting Paul Simon in school, the funny guy who made Art laugh; their going on to junior high school together, of being twelve at the birth of rock'n'roll, both of them "captured" by it; going to a recording studio in Manhattan to make a demo of their song, "Hey Schoolgirl" (for $7!) and the actual record (with Paul's father on bass) going to #40 on the national charts, selling 150,000 copies . . . He writes about their becoming Simon & Garfunkel, taking the world by storm, ruling the pop charts from the time he was sixteen, about not being a natural performer, but more a thinker . . . touring; sex-for-thrills on the road, reading or walking to calm down (walking across two continents--the USA and Europe). He writes of being an actor working with directors Nicolas Roeg (Bad Timing) and Mike Nichols ("the greatest of them all") . . . getting his masters in mathematics at Columbia; choosing music over a PhD; his slow unfolding split with Paul and its aftermath; learning to perform on his own, giving a thousand concerts worldwide, his voice going south (a stiffening of one vocal cord) and working to get it back . . . about being a husband, a father and much more.