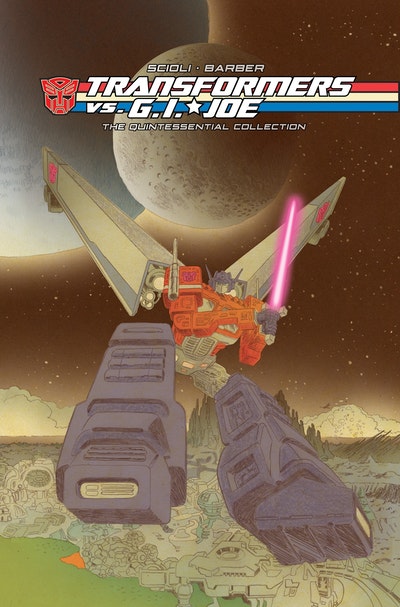 Earth makes contact with an alien race–and G.I. JOE is on the front lines! But, when the Transformers arrive–well, let’s just say you’ve never seen Transformers vs G.I. JOE like this!

Travel from Earth to Cybertron and back again as comic book luminary Tom Scioli turns his imagination loose on Hasbro's beloved toys!

Praise for Transformers Vs G.I. Joe The Quintessential Collection

"It is ridiculous that a comic called Transformers Vs. GI Joe is this beautiful. Instead of trying to take '80s toy nostalgia and make it sexy and modern, Tom Scioli and John Barber have made a comic that feels like playing with action figures in your backyard and looks like Gary Panter, Jack Kirby, and Anya Davidson's art. All the panels and pages are just a joy to stare at; it's like a Sears Christmas catalogue." - Vice "Even if it seems odd at first, it makes sense, really: Both long-lived Hasbro toy lines began life as Marvel comics, and even though the company never owned the trademarks, the core mythology and imagery of both properties is and has always been late-Bronze Age Marvel. But this is more than just peeling off the crusty corporate skin to find the sturdy Kirby-by-way-of-Trimpe skeleton underneath: Tom Scioli's work is always weirder than that. Kirby is still there, but so is Moebius and Gary Panter. Purists may bristle at Scioli's liberties, but should remember these are toys. Scioli gets that it should be fun, and it is." - A.V. Club