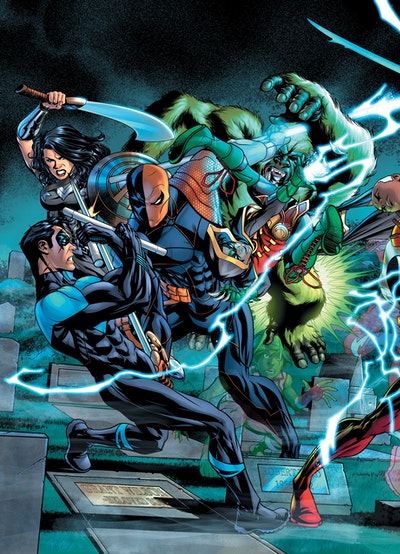 Titans past, present and future collide with their eternal enemy Deathstroke in this monumental crossover from DC Rebirth TITANS: THE LAZARUS CONTRACT!

With a powerhouse creative team of Dan Abnett, Benjamin Percy and Christopher Priest, TITANS: THE LAZARUS CONTRACT sets the stage for the next era of Titans, Teen Titans and Deathstroke, the consequences of which will be felt for years to come! Collects TITANS #11, TEEN TITANS #8, DEATHSTROKE #19 and TEEN TITANS ANNUAL #1.

Benjamin Percy was raised in the High Desert of Central Oregon.He is the author of The Language of Elk and winner of The Paris Review'sPlimpton Prize.His stories have appeared in various publications including Best American Short Stories.He is assistant professor at the University of Wisconsin, Stevens Point.

Praise for Titans The Lazarus Contract

Praise for TITANS: "Dan Abnett and Brett Booth offer everything a Titans fan wants and more." --IGN "Reminding readers why they were so invested in these characters in the first place..." --Newsarama "As a whole, TITANS stages a lovely reunion for its characters and clearly establishes friendship as the true core of this series." --Comic Book Resources