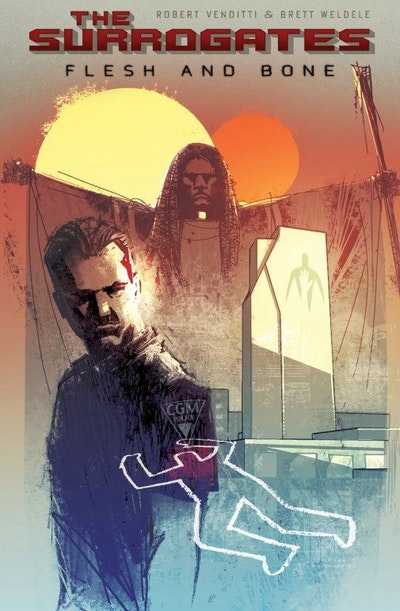 In a dark, downtown alley in Central Georgia Metropolis, a juvenile prank goes too far and a homeless man is killed. When the ensuing investigation reveals that the attackers aren't who they appeared to be, justice depends on the testimony of a single missing witness — a street snitch with a history of providing information to a cop named Harvey Greer. Harvey is placed on special assignment to track down the informant, but others have their own designs, including a wealthy socialite and an ex-con turned religious leader known to his followers as The Prophet. As days pass and anger among the anti-surrogate population grows, the city stands on a razor's edge. Will punishment be exacted in a courtroom or on the streets?
Set fifteen years prior to the events of the original Surrogates graphic novel, Flesh & Bone sheds light on the past that binds the cast together. From the streets of Central Georgia Metropolis to the boardroom of Virtual Self, Inc., Flesh & Bone takes us on a journey through a city struggling to come to grips with its present. Not only a suspenseful thriller but also a cautionary tale, this book reminds us that tomorrow will be determined by the choices we make today.