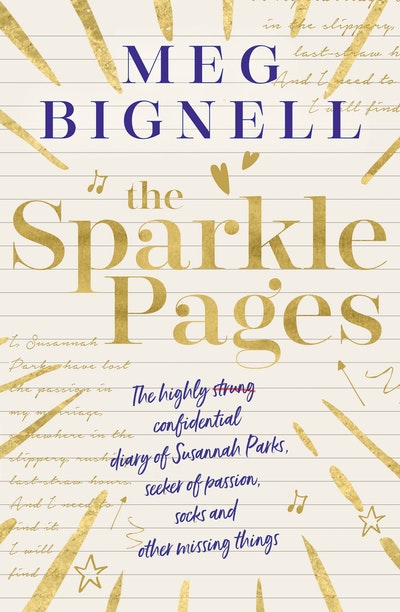 I have been hiding in the wardrobe for eleven and a half min­utes. I’ve done ten and a half minutes of deep breathing and a bit of meditation and still I don’t trust myself to come out. I am sit­ting on Hugh’s shoes, amid his hanging trousers. It might appear a bit childish, this hiding in the wardrobe, but actually I’m very sensibly not losing my temper. Trying at least; I can still feel some shouts threatening to burst out and screech all over the house. I must clutch on to them and stay here a bit longer. If I lose my temper, I might not find it in time for the New Year’s Eve guest arrivals . . .

Right, those deep breaths made me quite dizzy and my mind’s not made for meditation, so I’ve decided instead to turn my potential maelstrom into quietly written words that mar only this paper and not the impressionable, developing brains of my four darling children. Oh, I could say some things. Things that would end this year on a very bad note.

The possum was The Last Straw (I shouted, before shutting the rest of the shouts in the wardrobe). It is a ringtail possum so we have to save it, apparently. Jimmy was firm about this. ‘He’s fallen out of his nest, Mum.’

‘They don’t have nests, darling,’ I said. ‘It’s a possum, not a bird. Put it back. Its mother will be looking for it.’

‘They do have nests,’ he said, all outraged. ‘We did it in science. It’s a common ringtail. They build nests and have a declining population. He’s cold. He’ll die from the cold and his mother’s asleep. They’re mocturnal.’

I peered at the possum in his hands. It looked like a tiny alien foetus, all hairless and curled up, with very long fingers. Somehow quite sweet, especially in the hands of Jimmy, who is tough and sporty but goes all tender and soggy around animals. ‘Why are they called “common” if they’re in decline?’

Honestly. I long for the days of the schoolroom and mother-knows-best. A possum rescue is the last thing I need when the children are in a sugar frenzy and we’re hosting a dinner party.

I wasn’t going to start writing in this diary until the actual new year. But we’re very nearly there, aren’t we, and the diary happened to be here, waiting in the wardrobe when I dived in for refuge. Its pages are so clean and inviting, like washed sheets. Already I feel better for sinking into them. (Must remember to redo the spare bed before tonight.)

Just to be clear, this is a large walk-in wardrobe, not the closed-up cupboardy sort, so there’s really no reason why I should be crouched in the trousers, just that it’s more muffled and hidey. (Although the cupboard kind of wardrobe might open up to a whole new Narnia world into which I could run and vanish for a decently extended time without possums to keep alive or beds to make.) There’s even a chair in here; the grey velvet rocking chair that Mum gave me years ago for breastfeeding. It’s quite nice, that chair, even though it makes me feel sad about not having babies any more (and a bit tingly in the nipples). Perhaps I could do an upholstery course and re-cover it with something a bit less dull. Donkey-grey is probably the colour of disappointment. Floral? Yellow? Apricot? I’ve always liked apricot; reminds me of Mum. She has a velvet apricot dressing-gown.

The first dinner I ever cooked after Hugh and I were married was quite grey-looking. Beef stroganoff. Deeply disappointing. Hugh might have done well to treat it as a warning sign.

My viola is in the wardrobe too. Sometimes I come in here and look at it, give it a little ‘hello, how are you?’ No need for anything more than that; no need for any actual music playing. That really would end the year on very bad notes. All notes made by me from now on are the notes I make on these pages. So there we are . . .

And, anyway, viola playing would certainly wake the baby possum. It’s here with me, staying warm inside my shirt (and away from Barky, who wouldn’t eat it, I don’t think, but might possibly bark it to death). Jimmy’s sick of it already and has left me to deal with it. I’ve phoned the animal rescue people. Even they sounded possum-weary, despite me telling them it’s a precious ringtail.

‘Yes, they’re everywhere in West Hobart,’ they said. ‘Eating everyone’s lettuce seedlings. We can’t take it for three or four days, if it survives. Just feed it with a dropper.’

Hugh’s going to sigh and roll his eyeballs at me when he gets home. Oh, and:

While I’m sitting on his shoes trying to avert disastrous parenting fallout, Hugh has gone diving somewhere down the Tasman Peninsula. He claims to be hunting and gathering for tonight, but I know better. What a hardship, being in the peaceful underwater, filling your catch bag and listening to your own breaths in the static of the kelp forests. A bit like being among hanging trousers and hyperventilating with a hairless possum down your front. For goodness sake.

I’m in the rocking chair now. Rocking the possum. Or am I rocking myself, like a mad person? It’s quite soothing actually, and much more comfortable. My limbs were getting numb. I’m too tall to scrunch myself up into a hidey hole. I should reupholster this chair in apricot velvet and come here whenever I need a dose of dressing-gown comfort . . . and some diary writing.

I must not enter the new year in this present state. I will not be the one rocking in the wardrobe with a bald possum in my shirt. I will not be resentful of abalone, nor impatient with children being arseholes children. I will emerge from this wardrobe all pulled together and entertain our friends and family with utmost ease, good humour and very good hair. I will face the sugary, messy music in the kitchen, laugh with my spirited children, whip up some bruschetta and clean the windows. We will start the year on Very Good Notes.

And perhaps Hugh will fall properly back in love with me.

That’s my New Year’s Resolution, to help my husband love me again. That’s why I bought this diary, to record all my resolution notes – thoughts, plans, progress, research, etc. Perhaps I should write some sort of contract with myself, make it official right here at the start. Yes.

I, Susannah Parks, have lost the passion in my marriage, somewhere in the slippery, rushing, last-straw hours, and I need to find it. I will find it.

Sparks. Passion and sparks. And when there are no sparks, at least just a little sparkle.

So there we are, a contract. This is not one of my whims. I have also discussed it fully with Ria (my best friend, confidante and very wise person) and she has endorsed my proactivity. She would absolutely tell me if she thought I was being ridiculous. Actually, she did tell me I was being ridiculous, but that was before Christmas when I made noises about wanting to sell our chaotic house and move to the upper Derwent Valley, where Hugh and I can recalibrate, team-parent our free-range children, grow mangel-wurzels and milk a house cow. She reined me in, which – along with piano, flute and cello – she is very practised at.

‘Susannah,’ she said (I know to listen when she calls me Susannah), ‘you don’t need a house cow, you idiot. You need some passion.’

‘What? But I’m very passionate.’

‘About hiding vegetables in lasagne.’

‘That’s not fair, Ria. And shut up if you’re about to tell me to pick up the viola.’

‘Pick up the viola.’

‘Well, pick up your husband, then. Have you noticed him lately? He’s lovely.’

‘I notice him more than he notices me,’ I said. The words came out like those of a petulant teen, reminding me of Eloise when I ask her if she has any washing.

‘Have you also noticed that when you talk to him, it’s in that weird flat marriage monotone?’

‘Right.’ Something in her words was starting to ring true.

‘Look, we both know I’m no relationship expert but it seems to me there are two things you need to do when things are getting a bit stale: one, be interested, and two, be interesting.’

‘Be really interested. In the world, in other people, and mostly in Hugh.’

‘How often do you have sex?’

‘Well, you know, we have busy lives. It’s easy to just sail past one another in the hallway for a week before we actually spend time together.’

‘Sometimes,’ I said (also a lie – I don’t actually like to think too hard about how long it’s been since Hugh and I last made love).

‘Jesus, that is stale. You wouldn’t leave bread for a week without making a sandwich.’

‘Am I not interesting?’ I asked, trying to steer things away from sex.

‘Well, I think you’re endlessly fascinating, you know that. But we’re talking about Hugh. When was the last time you felt compelled to tell him all about something you’ve done, with light in your voice? When did you last try something new?’

I tried to think but could only come up with learning to make a pumpkin costume for Mary-Lou’s school play. I knew better than to volunteer that.

Ria put a knowing ‘hmm’ into the silence.

‘Like making kale into chips. And buying a fucking farmlet in Ouse.’

I had to be silent again. There’s no arguing with Ria, especially when she’s a little bit right. She was virtually raised by three older brothers and had to compensate for a lack of brawn with a very good brain. Its dispute centre is well exercised and in robust, rude health. It has to be said that, beyond the children, there’s hardly any no interest in my life. Incoming or outgoing.

‘Look,’ she said, just as the last of my reinvention zeal dissolved into dismay, ‘this isn’t that hard. You two are the best couple I know, honestly you are. Just resolve to work at it.’

‘You mean a resolution?’ I said. ‘I do love a New Year’s resolution.’

‘If you like,’ she said, then added, ‘but, for fuck’s sake, don’t run a mile with the idea. Take it quietly. Simple things. No enrolling in sexology degrees or getting your labia reduced.’

‘There are sexology degrees?’ I asked, with mock excitement.

But later I looked up ‘sexology’. And did a small assessment of my labia.

So, anyway, I should come out of the wardrobe. I’m not feeling so angry now. In fact, I’m feeling quite sad, remembering how not interesting I am. Even in this rocking chair I can feel the rising beat of my scaredy-cat heart. It’s disturbing the possum. There’s a lump the size of a plum pip forming in the back of my throat. Not now, not now. I have a New Year’s Eve party to throw. I’ll get to New Year’s resolutions tomorrow; I can be brave then. A brave new year. I don’t, at least, feel as though I’m going to shout. Sadness is easier to hide than fury. Also sparkly windows are easier to achieve than sparkly hearts, so I’ll get on with those. I hope we have Windex. 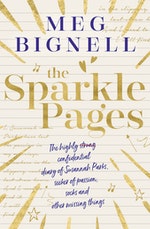 A wonderfully original and heartfelt comic novel about one woman's mission to reignite the passion in her marriage - and rediscover herself.