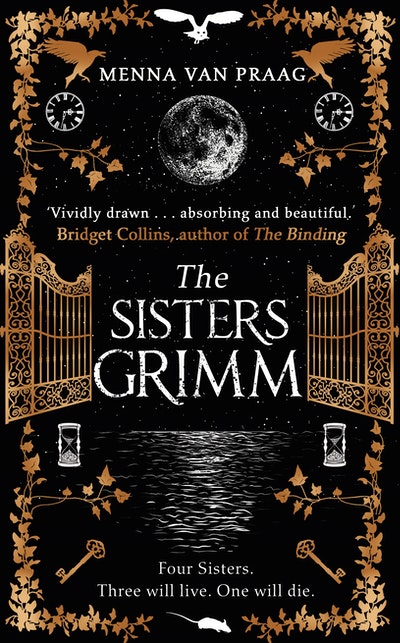 All souls are special. Son or daughter, Grimm or not, Life touches her spirit to every one of her creations. But the conception of a daughter is a particularly mystical event, requiring certain alchemical influences. For, to conceive a being who can bear and birth life herself needs a little something . . . extra.

Every daughter is born of an element, infused with its own particular powers. Some are born of earth: fertile as soil, strong as stone, steady as the ancient oak. Others of fire: explosive as gunpowder, seductive as light, fierce as an unbound flame. Others of water: calm as a lake, relentless as a wave, unfathomable as an ocean. The Sisters Grimm are daughters of air – at least they begin that way – born of dreams and prayer, faith and imagination, bright-white wishing and black-edged desire.

There are hundreds, possibly thousands, of Sisters Grimm on Earth and in Everwhere. You may well be one of them, though you might never know it. You think you’re ordinary. You’ve never suspected that you’re stronger than you seem, braver than you feel or greater than you imagine.

But I hope that by the time you finish this tale, you’ll start listening to the whispers that speak of unknown things, the signs that point in unseen directions and the nudges that suggest unimagined possibilities. I hope too that you’ll discover your own magnificence, your own magic.

I’ve been a thief for as long as I can remember, a liar too. I might even be a murderer, though you’ll have to make up your own mind about that.

I stuff the notebook into my apron pocket, along with the pen, smooth the bed sheets, wipe a last smudge from the gilded hallway mirror, blow a kiss and a line of poetry to the speckled pink orchid on the shelf beneath, before dashing out of room 13 and into the corridor.

Mr Garrick waits, his close-set eyes squinting, his head shining under the ceiling lights. He smooths his skull with greasy hands. If he could transplant the hairs from his hands to his head, he’d be on to something.

‘Get down to the front desk, Goldie. Cassie’s called in sick.’

‘Now.’ Garrick tweaks the knot in his tie – too tight around his fat neck which folds like a billowing sheet over his collar – then tries to snap his swollen fingers, but he’s sweating too much and the sound is pathetic. I try not to show my disgust.

I follow Garrick into the lift, leeching to the wall. It does no good. Those greasy, greedy hands still slide over to paw at me, to trace the lines of territories he has no right to touch. When his fingertip brushes the swell of my breast, I’m empty of breath, a single taut muscle, contracting against the urge to urinate. I never could control it as a child, I usually can now. When the doors ping open, I fall out into the foyer. Garrick takes his time, smoothing polyester waistcoat over swollen belly, adjusting polyester tie, before sauntering to the front desk.

I’m already there, waiting. If I didn’t need this bloody job so much, to feed and clothe Teddy, I’d snap those fat fingers at the bone. I’d open my mouth to invite him in, then bite down until his blood dripped from my chin.

‘I know.’ Garrick sighs, expelling stale, smoky breath. ‘But she’s not answering her phone. Anyway, we’re only expecting half a dozen guests today.’ He smiles the dirty smile again. ‘So you just have to stand behind the desk and look pretty. I’m sure even you can manage that.’

I stare at the empty space and say nothing.

‘Hey, Goldie.’ I look up to see Jake, the porter, giving me a shy wave. We’re sort of seeing each other. He’s a little boring, but sweet and kind and doesn’t ask for much. Which is fortunate, since I’ve little to offer.

Jake sidles up to the desk. ‘What are you doing down here?’

He’s quite handsome, but it won’t last. I flinch whenever he tries to touch me. It’s not his fault, but I can’t seem to find the words to explain.

‘Have you worked the front desk before?’

‘Yeah,’ I lie. Jake has only been working at the hotel for six weeks, so I can say what I like. I can pretend I’m brave, that I don’t give a shit, that being shoved out onto the front desk doesn’t feel like I’ve been strapped into stocks in the town square.

‘I’d be nervous,’ Jake says. ‘I wouldn’t know what to say.’ He rests his right hand tentatively on the front desk. He wants to reach for me, but he won’t.

‘I don’t know.’ I pause. ‘It’s better than cleaning toilets, I suppose.’

Jake drops his hand. We turn towards the shouting.

‘I’d better go,’ he says, already halfway to the stairs. He doesn’t look back to smile or wave – he can’t. There’s a great deal our boss can’t tolerate, but waiting is what makes the veins in his bald head bulge the soonest.

Behind the desk, I glare at the phone, willing it to stay silent. I pick a few stray long hairs from the sleeve of my hotel-issue polyester shirt. I’m too dishevelled for this job. I curse Cassie. She should be here, the front desk princess. Beautiful Cassie, voluptuous as a vase of peonies. Beside her, I’m a daffodil. We used to clean rooms together but Cassie was always keen to get promoted. It’s more money, more prestige. You don’t have to wear a dowdy uniform and you earn your wage grinning at guests, instead of sticking your head in toilet bowls smelling (hopefully) of Harpic. Personally, the fewer people I see the better. Garrick is quite enough to swallow down every day.

Speaking of swallowing, it’s a not-so-secret secret that Cassie did exactly that to get herself transferred up from the toilets to the front desk. Garrick’s not managed to get those greedy hands very far with me – I’ve made sure we’re never alone for long enough. So he can only grope, fondle and insinuate.

One day I’ll take something heavy and bring it down hard on his bald head.

Standing behind the front desk, wearing the hotel crest and a rictus grin, I feel the press of my notebook in my pocket. I can’t scribble out here, which is perhaps the worst thing about being put on the front desk. You see, I’m not simply a thief but a writer too. Possibly even a poet, but only by my own measure. I accommodate a constant chatter in my mind, a commentary on every mundane event of my life. I can’t control it. But I write down anything worthwhile when I can. It soothes my mind a little.

Since I can’t write, I think about Teddy. I wonder what he’s learning, what new facts are now widening his eyes with excitement. Thinking about my brother always settles me. He’s nearly ten and everything a child should be: innocent, joyful, kind. I’ll make sure he stays that way. Whatever it takes. He’s a good soul; I was a lost cause a long time ago.

After rent and bills, most of my wages go towards Teddy’s school fees: £8,590 a year. And, since I earn £7.57 per hour for 63 hours a week, that’s where the thieving comes in. I know he could go to a state school, but he’s so happy at St Faith’s. And, after everything, I want him happy for as long as possible. So, on occasion, I relieve our richer guests of their frivolous possessions. It’s surprising what people don’t miss when they have too much.

I glance up to see a gentleman gazing down his Roman nose at me.

He ignores my smile, my attempts to rewind inattentiveness.

I nod. I have no small talk to offer. I only pray the wife’s request has been heeded. I’ve no finesse with irate guests. They twist me up with their condescension and contempt.

I tap the name into the computer and it comes up trumps, the wife’s request and all. When I look up again, he has appeared at Penry-Jones’s side.

He is tall and slender, but strong, like a silver birch tree, and almost as preternaturally pale – hair blond as sunlight cresting its topmost branches. The irises of his eyes are half a dozen shades of green: the lightest of newly seeded grass, of fresh shoots in spring, dark forest green, grey laurel green, bright pine green, shining myrtle green, creamy avocado green . . . He gives me a small, self-conscious smile. I stare back at him and then, all at once, feel something I’ve never felt before – suddenly and entirely alight.

‘Where have you been, Leo?’

I smile to myself; I know his name. They must be father and son, though they aren’t so similar. The father fits perfectly into this polished room, like a cultivated hot-house cactus, while the son seems slightly out of place.

‘Where is your mother?’

‘Getting something from the car. She’s coming.’

His voice is soft and posh. His hands, hanging by his sides, are sturdy. His fingers long stems, so I imagine his touch tender and his hold strong. I feel ribbons of desire begin to unfurl inside me. I snip at their silky threads.

‘She’s sulking,’ Penry-Jones says. ‘She always clamours to come on these business trips, then complains when I conduct any business. At least you’ll be here for a few days to take the heat off.’

‘Your room keys,’ I say, sliding them across the polished wood.

‘I’d like a wake-up call at six thirty.’ The father palms the keys. ‘What time does the restaurant open for dinner?’

‘That won’t be necessary.’ He looks to Leo. ‘Let’s go. Your mother can meet us in the bar.’

With that, the father strides off across the foyer. The son follows.

When he reaches the lift, he does. As soon as our eyes meet, I glance down at the desk. When I glance up again, he’s gone. 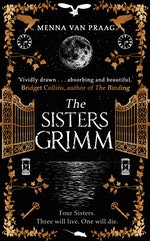 A tour de force of fairytale and imagination, The Sisters Grimm is the first fantasy novel by Menna van Praag - a magical tale of life, death and sisterhood that brings to mind Beautiful Creatures, Daughter of Smoke and Bone and Stardust.