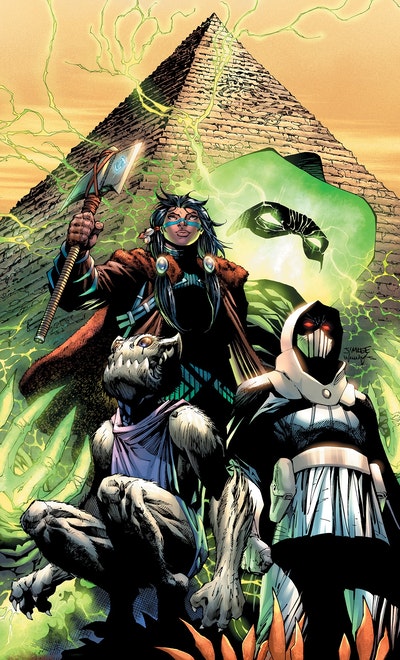 The superstar creative team of comics legend Jim Lee (Batman, Justice League) and James Tynion IV (Detective Comics) unite to tell the tale of the secret history of heroes who have protected humanity from the shadows since the dawn of time...and who can live forever. The Immortal Men Vol. 1 is part of The New Age of Heroes, a bold new line of comics starring a thrilling array of heroes.

The Immortal Man has waged a secret war against the House of Conquest for countless years--but Conquest has dealt a devastating blow. When their base of operations, known as the Campus, is savagely attacked, the Immortal Men must seek out their last hope--an emerging metahuman known as Caden Park! Caden's emerging powers may be able to ensure the Immortal Men's survival--but will Conquest get to him first? Collects issues #1-6.

In the New Age of Heroes, the DCU expands as DC introduces a bold new line of comics starring a thrilling array of heroes--some you know, some you may have glimpsed in the pages of Dark Nights: Metal. They embody a spirit of epic, adventurous bravery--the kind you may remember from another era, but updated in an exciting way for today. Illustrated by DC's Master Class of artists, including legendary names like Jim Lee, Andy Kubert, John Romita Jr., Ivan Reis, Tony S. Daniel and others, these new series are great entry points for new readers and a welcome addition for longtime fans of the DC library.