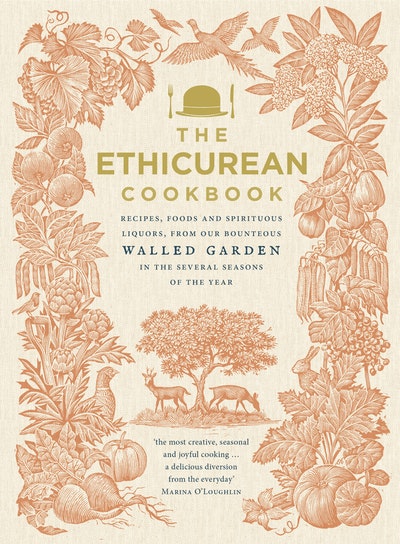 Recipes, foods and spirituous liquors, from our bounteous walled garden in the several seasons of the year 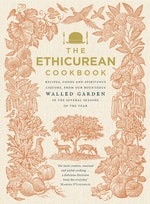 The future of British cooking, inspired by the food of the past: a year of recipes, ingredients and photographs from a walled garden in Somerset

The Ethicurean is quietly changing the face of modern British cooking:­ all from a walled garden in the heart of the Mendip Hills. The Ethicurean Cookbook follows a year in their magnificent kitchen and garden,­ and celebrates the greatest food, drink and traditions of this fair land.

The combinations are electric: confit rabbit is paired with lovage breadcrumbs, cured roe deer flirts with wood sorrel, and foraged nettle soup is fortified by a young Caerphilly. The salads are as fresh as a daisy: honeyed walnuts nestle amongst beetroot carpaccio, rich curd cheese is balanced by delicate cucumber. And the comfort of pies and puds - pork and juniper pie, Eccles cakes with Dorset Blue Vinny­ - is only enhanced by the apple juice, cider and beer poured in equal measure.

With 120 recipes and a year of seasonal inspiration in photographs and words, Ethicureanism is a new British cooking manifesto.

Praise for The Ethicurean Cookbook

“Book of the year? The Ethicurean Cookbook, a beautiful book full of innovative seasonal recipes inspired by a year in the walled kitchen garden that supplies the much-lauded Ethicurean Restaurant near Bristol.”

“There's a magical walled garden just outside Bristol. Inside, instead of fairy stories, you'll find the most creative, seasonal and joyful cooking, a hearty serving of boozy bonhomie and a dash of English eccentricity. This book offers a delicious diversion from the everyday - it's your key to the garden.”

“A splendid picture of a walled garden, tinctures, cider, bowler hats and cooking in seasons, all make up the Ethicurean”

“The UK's answer to NOMA”