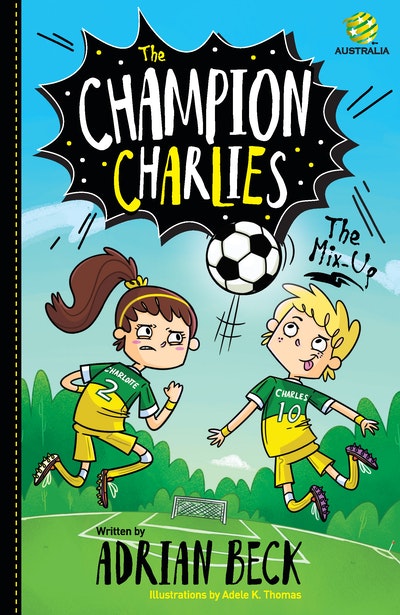 The Champion Charlies 1: The Mix-Up

That was the ACTUAL front-page headline on the local newspaper. In big CAPITAL letters. Right beside a ‘free burger’ coupon.

The page had been plastered onto the school clubroom’s noticeboard since last year. The noticeboard was on the outside wall that faced the football pitch. By now the whole school had seen the article. Charles ‘CJ’ Jackson and Charlotte Alessi were posed in their Jets FC football gear for the photo. The shot was taken after their Grand Finals. CJ’s team had just won their match in a nailbiting finish. Whilst Charlotte’s team had thumped their opposition to claim the title in the girls’ league. They were all smiles. Th ey were CHAMPIONS! They were being peed on by a dog.

‘Garlic!’ laughed Benji Nguyen, as he exited the clubrooms and patted the kelpie on his way past. ‘Your aim is worse than your breath! Get outta here, boy!’

Garlic jumped from the bench and ran off to find his owner, the school gardener, Baldock.

Benji had found what he was looking for in the clubrooms. A megaphone. Holding onto his signature Socceroos cap, Benji sprinted towards the playground beside the clubrooms where CJ was grinning maniacally on top of the monkey bars. CJ and Benji were best friends, both TOP OF THEIR FIELD. CJ was the Jets’ leading goalscorer and Benji was the Jets’ leading mascot. And also the only mascot. Not just for the Jets, but pretty much for the whole Under 11 boys’ league.

Below CJ, Charlotte stood beneath the monkey bars with her arms firmly crossed. She ALWAYS wore her hair in a neat no-nonsense ponytail, but right now CJ thought her hair was pulled back tighter than ever.

‘This is so NOT funny, CJ,’ said Charlotte.

‘If you end up in hospital, you won’t be able to go to the big Matildas match with us on Thursday night!’

Lexi Li had the school iPad out, videoing the whole scene, selfie-style. Lexi was the closest thing Charlotte, who could be pretty uptight, had to a bestie. As Lexi hit record, she flicked her fringe so that it cascaded perfectly over her big dark eyes. She was destined to become Insta-famous one day. Somehow she even made the Jindaberg Primary School uniform look good. Lexi moved from the football pitch to the playground, to the school chicken coop, unable to stand still. ‘CJ, let me find some good lighting. If this goes viral I need to be looking my best, okay?’

CJ was balancing on top of the monkey bars. His scruffy blond hair battered by the wind. He’d whacked the seat of the swing under his arm and carried it up there till the chains stretched out horizontally from the swing’s frame. There was a wild look in his eyes. Even more so than usual. Like he’d just eaten a whole pack of Tim Tams.

The kids’ football was stuck in the blooming cherry blossom tree. And the school lunch break had only just begun.

‘Stop wasting my time, CJ. I’ve allocated exactly twenty minutes to football, twenty minutes to writing a book report and twenty minutes to knitting my little sister a green and gold beanie for Thursday,’ said Charlotte, checking her watch as she so often did. ‘Clearly, the sensible, and safer, thing to do is just ask a teacher for help. Not do whatever you’re planning. You dingbat!’

‘I take that as a compliment!’ giggled CJ.

Then he lost his balance. He flung his free arm about to steady himself. As he regained his footing he only laughed louder. ‘Relax! I’ve got this!’

‘Come one! Come all!’ announced Benji, as he finally worked out how to switch on the megaphone. His voice echoed down the slope from the football pitch to the rest of the school below. ‘Watch CJ attempt another dangerous dare . . . will he fly like an eagle, or will he go the way of the dodo. Either way, you don’t want to miss it!’

Charlotte shook her head at Benji as more and more kids ran over.

‘Sorry, Charlotte, this is just too good to ignore,’ laughed Benji. They may have all been in the same class but they didn’t all share the same sense of humour. ‘Gather round, catch CJ in action so you can say you saw him when he still had his teeth!’

‘Get down, CJ!’ snapped Charlotte. ‘That old statue is in your path anyway. We can just throw a tennis ball at the football. That might knock it free.’

‘Chill, Charlotte. I’ve got this sussed,’ said CJ, rubbing his hands together. ‘I’m going to leap onto this swing, fly through the air so high that I miss the statue of that old dude –’

Charlotte glared at CJ. ‘Captain Jonas Jindaberg, who our home suburb is actually named after. Show some respect!’

‘Yep, right over old J-Berg’s head, then I’ll bicycle kick in midair – like Wayne Rooney against Man City in 2011 – and boot that football right outta the tree. Game on! Simple!’

‘Will not,’ said Charlotte, turning to Lexi. ‘I kind of want you to keep filming this just to teach him a lesson, okay?’

Lexi looked away from the iPad to give Charlotte a thumbs up, then returned to pulling her best duck face.

Benji put his mascot moves to good use and cartwheeled beneath the monkey bars. ‘Give me a C! Give me a J! What does it spell?’

‘Are they? I thought his name was French or something,’ admitted Lexi, still smiling for the camera. Lexi and her father won a Daddy/Daughter beauty contest when she was just three, before the family left New Zealand. Ever since, she could bust out a cheesy grin in mere nanoseconds.

‘Here I go!’ cried CJ, as he put one foot on the seat of the swing. Then he pushed himself off. He started swinging. Fast. His hair whooshed straight. ‘SEE YA, SUCKERS!’

The swing flew low. CJ shifted his weight, ready to somersault. About to try to bicycle kick the ball from the tree. He swung higher, and higher and then . . .

CJ hit the statue. He squished right into it. Then hung onto it like it was his long lost teddy bear.

‘Ouch!’ cried Benji. ‘I’ll always remember that nose as it was, before it was shattered into a thousand pieces.’

The swing kept swinging without CJ. It smacked into the overhanging tree, and then pulled on the branch as it swung back down. The branch split off the tree and started hurtling towards the statue. CJ squeezed his eyes shut.

The broken end got lodged straight down the throat of the statue.

‘That’s got to clear the sinuses, folks!’ cried Benji.

It looked like the statue was SPEWING OUT blossom. A huge explosion of colour was being hurled right out of old J-Berg’s open gob.

‘You know what? You were right, Charlotte,’ grinned CJ, as he peeled his face free. ‘I was never going to clear this statue.’

‘What on earth is going on up here?’ cried Principal Swift, as she arrived on the pitch, glaring at CJ through her big round glasses that made her look like an owl.

The scene spoke for itself: kids gathered around CJ who was hugging a SPEWING STATUE. It was not a good look.

Charlotte spoke up. ‘We were trying to retrieve the football, but –’

‘It was a classic!’ laughed Benji.

‘Sorry. I was just super keen to play football,’ said CJ. ‘The season starts this weekend.’

‘No it does not,’ said Principal Swift, shaking her head at the state of the statue.

‘You heard. And this goes for both teams. This year, there’ll be no football!’ said Principal Swift, as she turned sharply and stormed back down to her office.

Despite all the pain CJ was in, it was Principal Swift’s words that hurt the most. 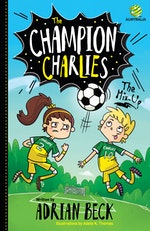 A hilarious junior fiction series for boys and girls that celebrates the great world game of football! Developed in partnership with Football Federation Australia.