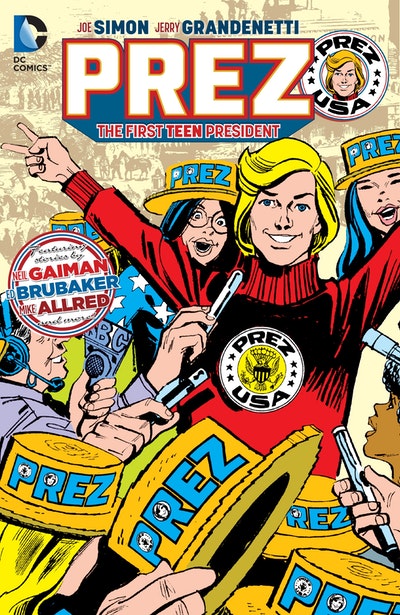 One of the stranger series ever published by DC Comics, PREZ was the story of the nation's first teenage president. With the lowering of the voting age to 18 in the late 1960s, it was only a matter of time until a teenager ran for the highest office in the land—and in PREZ, the aptly named Prez Rickard won, becoming the first teenaged president in U.S. history! But with such power comes corruption—in this case, in the form of Boss Smiley, a literally smiley-faced political fixer who wants Prez to do his bidding.

This title collects all the appearances of Prez since his 1973 debut, including tales by Neil Gaiman (THE SANDMAN #54), Frank Miller (BATMAN: THE DARK KNIGHT STRIKES AGAIN #1) and Ed Brubaker (the grunge-influenced VERTIGO VISIONS: PREZ #1). Collects PREZ #1-4, a story from CANCELLED COMICS CAVALCADE, SUPERGIRL #10 (1974), THE SANDMAN #54, VERTIGO VISIONS: PREZ #1 and BATMAN: THE DARK KNIGHT STRIKES AGAIN #1.