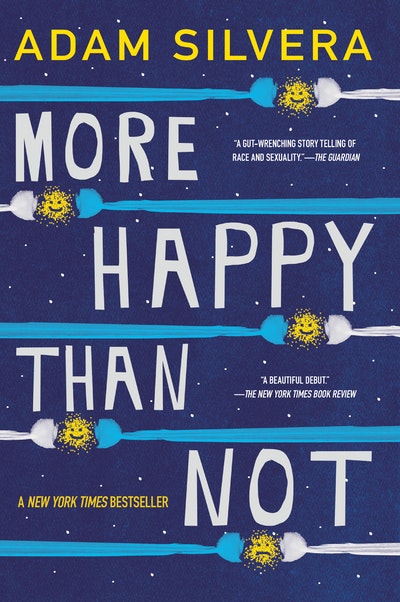 The first time I saw a poster on the subway promoting the institute that could make you forget things, I thought it was a marketing campaign for some new science fiction movie. And when I saw the headline “Here Today, Gone Tomorrow!” on the cover of a newspaper, I mistook it as something boring, like the cure for some new flu—I didn’t think they were talking about memories. It rained that weekend, so I hung out with my friends at the Laundromat, chilling in front of the security guard’s old TV. Every single news station was interviewing different representatives of the Leteo Institute to find out more about the “revolutionary science of memory alteration and suppression.”

I called bullshit at the end of each one.

Except now we know the procedure is 100 percent real and 0 percent bullshit because one of our own has gone through it.

That’s what Brendan, my sort of best friend, tells me at least. I know him as much for his honesty as I know Baby Freddy’s mother for her dedication to confirming the gossip that comes her way. (Rumor has it she’s learning basic French because her neighbor down the hall may be having an affair with the married superintendent, and the language barrier is a bit of a block. But, yeah, that’s gossip too.) “So Leteo is legit?” I sit down by the sandbox no one plays in because of ringworm.

Brendan paces back and forth, dribbling our friend Deon’s basketball between his legs. “That’s why Kyle and his family bounced,” he says. “Fresh start.”

I don’t even have to ask what he forgot. Kyle’s identical twin brother, Kenneth, was gunned down last December for sleeping with this guy Jordan’s younger sister. Kyle was the one who actually slept with her, though. I know grief just fine, but I can’t imagine living day by day with that—knowing the brother I shared a face and secret language with was ripped out of my life when the bullets were meant for me.

The usual suspects are outside today. Skinny-Dave and Fat-Dave—who are unrelated, just both named Dave—come out of our local bodega, Good Food’s Store, where I’ve been working part-time for the past couple of months. They’re throwing back quarter juices and potato chips. Baby Freddy glides on by with his new steel orange bike, and I remember when we used to give him shit years ago for still needing training wheels—but the joke is on me since my father never got a chance to teach me to ride at all. Me-Crazy is sitting on the ground, having a conversation with the wall; and everyone else, the adults mainly, are preparing for this weekend’s community event of the year.

This will be the first time we’re celebrating Family Day without Kenneth and Kyle, or Brendan’s parents, or my dad. It’s not like Dad and I were gonna have father–son wheelbarrow races or father–son basketball games; besides, Dad always paired up with my brother, Eric. But father–son anything would’ve been better than this. I can’t imagine it’s any easier for Brendan, even though his parents are both alive. It might be worse, since they’re just out of reach in boxy jail cells for separate crimes: his mother for armed robbery, his father for assaulting a police officer after he was caught dealing meth. Now he lives with his grandfather who is thugging it out at eighty-eight.

“Everyone’s going to expect smiles from us,” I say.

“Everyone can go suck it,” Brendan replies. He pockets his hands, and I bet there’s weed in there; dealing pot has been his way of growing up faster, even though it’s pretty much what landed his dad in prison eight months ago. He checks his watch, struggling to read what the hands are saying. “I have to go meet someone.” He doesn’t even wait for me to respond before he walks off.

He’s a guy of few words, which is why he’s only my sort of best friend. A real best friend would use a lot of words to make you feel somewhat good about your life when you’re thinking about ending it. Like I tried to. Instead, he distanced himself from me because he felt as if he had a duty to hang with the other black kids—which I thought and still think is bullshit.

I miss the time when we took full advantage of summer nights, ignoring curfew so we could lie down on the black mat of the jungle gym and talk about girls and futures too big for us—which always seemed like it might be okay, as long we were stuck here with each other. Now we come outside because of routine, not brotherhood.

It’s just one more thing I have to pretend I’m okay with.

Home is a one-bedroom apartment for the four of us. I mean, three of us. Three. I share the living room with Eric, who should be home any minute now from his shift at the used video game store on Third Avenue. He’ll power on one of his two gaming consoles, chat with his online friends through a headset, and play until his team bows out around 4 a.m. I bet Mom will try and get him to apply to some colleges. I don’t plan on sticking around for the argument.

There are stacks of unread comics on my side of the room. I bought a lot of them for cheap, like between seventy-five cents and two dollars at my favorite comic shop, without any real intention to read them from start to finish. I just like having a collection to show off whenever one of my more well-off friends comes over. I subscribed to one series, The Dark Alternates, when everyone got into it at school last year, but so far I’ve only gotten around to flipping through them to see if the artists have done anything interesting.

Whenever I really get into a book, I draw my favorite scenes inside them: in World War Z, I drew the Battle of Yonkers where zombies dominated; in The Legend of Sleepy Hollow, I drew the moment we meet the Headless Horseman because that was when I suddenly cared about an otherwise so-so ghost story; and, in Scorpius Hawthorne and the Convict of Abbadon—the third book in my favorite fantasy series about a demonic boy wizard—I drew the monstrous Abbadon being split into two from Scorpius’s Sever Charm.

I haven’t been drawing very much lately. The shower always takes a few minutes to heat up so I turn it on and go check on my mom. I knock on her bedroom door, and she doesn’t answer. The TV is on, though. When your only living parent isn’t responding, you can’t help but think of that time when your father was found dead in the bathtub—and the possibility that beyond your home’s only bedroom door life as an orphan awaits you. So I go inside. She’s just waking up from her second nap of the day to an episode of Law & Order. “You okay, Mom?”

“I’m fine, my son.” She rarely calls me Aaron or “my baby” anymore, and while I was never a fan of the latter, especially whenever my friends were around, at least it showed that there was life inside of her. Now she’s just wiped. Beside her is a half-eaten slice of pizza she asked me to get her from Yolanda’s Pizzeria, the empty cup of coffee I brought her back from Joey’s, and a couple of Leteo pamphlets she picked up on her own. She’s always believed in the procedure, but that means nothing to me since she also believes in Santeria. She puts on her glasses, which conveniently hide the sunken lines around her eyes from her crazy work hours.

She’s a social worker at Washington Hospital five days a week, and spends four evenings handling meat at the supermarket for extra cash to keep this tiny roof over our heads.

“You didn’t like the pizza? I can get you something else.”

Mom ignores this. She gets out of bed, tugging at the collar of her sister’s hand-me-down shirt she recently lost enough weight to fit into because of her “Poverty Diet,” and hugs me harder than she has since Dad died. “I wish there was something else we could’ve done.”

“Uh . . .” I hug her back, never knowing what to say when she cries about what Dad did and what I tried to do. I just look at the Leteo pamphlets again. There is something else we could’ve done for him—we just never would’ve been able to afford it. “I should probably shower before the water gets cold again. Sorry.”

I pretend everything is okay as I rush to the bathroom where steam has fogged up the mirror. I quickly undress. But I stop before stepping in because the tub—finally clean after lots of bleach—remains the spot where he took his life. His memories sucker punch my brother and me at every turn: the pen marks on the wall where he measured our height; the king-sized bed where he would flip us while watching the news; the stove where he cooked empanadas for our birthdays. We can’t exactly just escape these things by moving into a different, bigger apartment. No, we’re stuck here in this place where we have to shake mouse shit out of our shoes and inspect our glasses of soda before drinking in case roaches dived in while our backs were turned.

Our hot water doesn’t run hot for very long so I jump in before I miss my chance.

I rest my head against the wall, the water sliding through my hair and down my back, and I think about all the memories I would want Leteo to bury. They all have to do with living in a post-Dad world. I flip over my wrist and stare at my scar. I can’t believe I was once that guy who carved a smile into his wrist because he couldn’t find happiness, that guy who thought he would find it in death. No matter what drove my dad to kill himself—his tough upbringing in a home with eight older brothers, or his job at the infamous post office up the block, or any one of a million reasons—I have to push ahead with the people who don’t take the easy way out, who love me enough to stay alive even when life sucks.

I trace the smiling scar, left to right and right to left, happy to have it as a reminder not to be such a dumbass again. 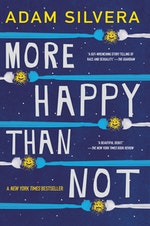 More Happy Than Not Adam Silvera

In his twisty, gritty, profoundly moving New York Times bestselling-debut—also called “mandatory reading” and selected as an Editors' Choice by the New York Times—Adam Silvera brings to life a charged, dangerous near-future summer in the Bronx.