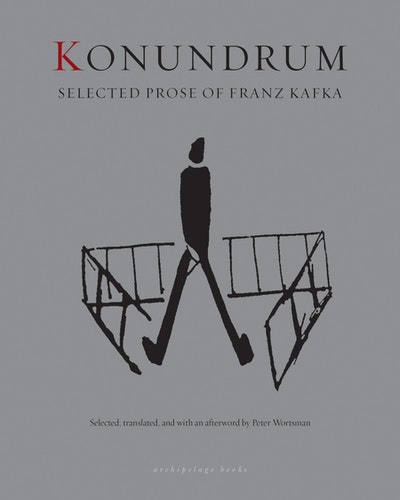 In this new selection and translation, Peter Wortsman mines Franz Kafka's entire opus of short prose--including works published in the author's brief lifetime, posthumously published stories, journals, and letters--for narratives that sound the imaginative depths of the great German-Jewish scribe from Prague. It is the first volume in English to consider his deeply strange, resonantly humane letters and journal entries alongside his classic short fiction and lyrical vignettes "Transformed" is a vivid retranslation of one of Kafka's signature stories, "Die Verwandlung," commonly rendered in English as "The Metamorphosis." Composed of short, black comic parables, fables, fairy tales, and reflections, Konundrums also includes classic stories like "In the Penal Colony," Kafka's prescient foreshadowing of the nightmare of the Twentieth Century, refreshing the writer's mythic storytelling powers for a new generation of readers.

• "[Kafka] spoke for millions in their new unease; a century after his birth, he seems the last holy writer, and the supreme fabulist of modern man's cosmic predicament." --John Updike    • "Kafka's survey of the insectile situation of young Jews in inner Bohemia can hardly be improved upon: 'With their posterior legs they were still glued to their father's Jewishness and with their wavering anterior legs they found no new ground.' There is a sense in which Kafka's Jewish question ('What have I in common with Jews?') has become everybody's question, Jewish alienation the template for all our doubts. What is Muslimness? What is femaleness? What is Polishness? These days we all find our anterior legs flailing before us. We're all insects, all Ungeziefer, now." --Zadie Smith    • "[Kafka's] stories are dreamlike, allegorical, symbolic, parabolic, grotesque, ritualistic, nasty, lucent, extremely personal, ghoulishly detached, exquisitely comic, numinous, and prophetic." --The New York Times    • "The distinction Kafka, or his heroes, draw between this world and the world does not imply that there are two different worlds, only that our habitual conceptions of reality are not the true conception." --W. H. Auden "Kafka engaged in no technical experiments whatsoever; without in any way changing the German language, he stripped it of its involved constructions until it became clear and simple, like everyday speech purified of slang and negligence. The common experience of Kafka's readers is one of general and vague fascination, even in stories they fail to understand, a precise recollection of strange and seemingly absurd images and descriptions--until one day the hidden meaning reveals itself to them with the sudden evidence of a truth simple and incontestable." --Hannah Arendt