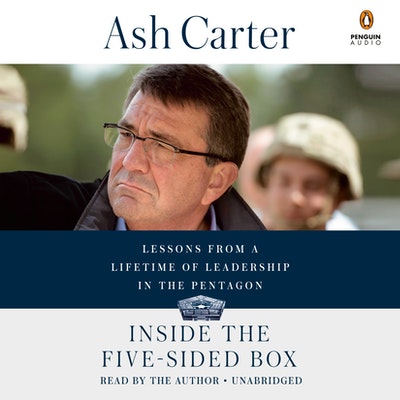 Inside the Five-Sided Box

Lessons from a Lifetime of Leadership in the Pentagon

The twenty-fifth Secretary of Defense takes readers behind the scenes to reveal the inner workings of the Pentagon and what it takes to lead it.

The Pentagon serves as headquarters to the single largest institution in America: The Department of Defense. The D.O.D. employs millions of Americans. It owns and operates more real estate, and spends more money, than any other entity. It manages the world's largest and most complex information network and performs more scientific research by far than any other institution.

Yet to most Americans, the dealings of the D.O.D are a mystery and the Pentagon nothing more than an opaque five-sided box that they regard with a mixture of awe and suspicion.

In this memoir, Ash Carter, the twenty-fifth Secretary of Defense, demystifies the Pentagon and lays bare the inner workings of the D.O.D in order to shed light on all that happens inside one of the nation's most iconic buildings and most closely guarded institutions. Drawing from Carter's thirty-six years of leadership experience in the Department of Defense, this will be the essential book for understanding the Pentagon and the tireless work of the capable men and women who run it.

Especially now, as the President levels spurious accusations against the Pentagon and U.S. intelligence agencies, the need for Ash Carter’s authoritative memoir is more urgent than ever.