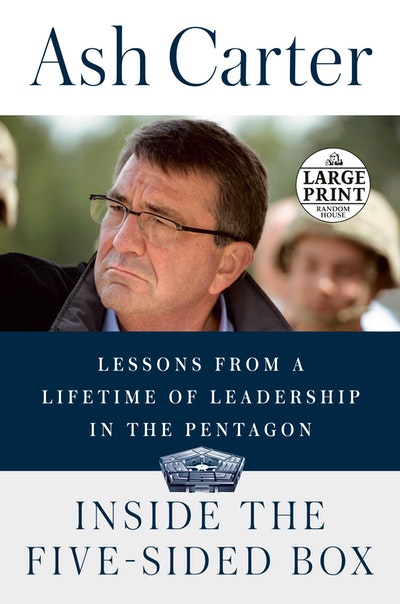 Inside the Five-Sided Box

Lessons from a Lifetime of Leadership in the Pentagon

Now in paperback, from the former Secretary of Defense, a fascinating, behind-the-scenes memoir that reveals the inner workings of the Pentagon. A straight-talking account that explains not only what happens in the Pentagon but why—and why it matters—written by the man who used to run it.

From the former Secretary of Defense, a fascinating, behind-the-scenes memoir that reveals the inner workings of the Pentagon. A straight-talking account that explains not only what happens in the Pentagon but why--and why it matters--written by the man who used to run it.

There is no single institution in America as big as the Department of Defense. It spends more money than any other. It employs millions of Americans. It owns and operates more real estate than any other entity. It manages the world's largest and most complex information network and performs more scientific research by far than any other institution.

For all these reasons, the Pentagon is a vast and powerful presence in our national life. Yet to most Americans, it is mysterious--a largely opaque five-sided box that many regard with a mixture of awe and suspicion. Especially now, as the president levels accusations against the Pentagon and other intelligence agencies, the need for this book, which demystifies the Pentagon and lays bare the inner workings of Department of Defense, is more urgent than ever. And there is no person alive better suited to telling it than the 25th Secretary of Defense, Ash Carter.

This will be the essential book for understanding the Pentagon and America's defense establishment. As secretary, Carter advised President Obama and transformed the department's strategic thinking and operations on critical global politics. Drawing from Carter's thirty-six years of experience at the Defense Department, including the department's #2 and #3 jobs before serving as secretary, this memoir provides clear insight into the most important decisions of the last four decades, to shed light on exactly what is happening inside one of the nation's most iconic buildings and most closely guarded institutions.