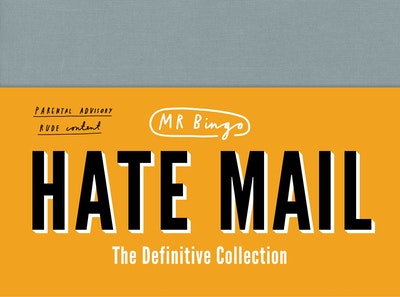 A special delivery of ALL NEW, hilariously offensive Hate Mail from Mr Bingo - in a stonking hardback Definitive Collection edition - for fans of Modern Toss, Banksy: Wall and Piece, Pets with Tourettes and David Shrigley

The brainchild of a late night and one too many drinks, Hate Mail began with self-styled ‘Master of Pens’, Mr. Bingo, sending a single tweet off into the pipes of the internet. It read: ‘I will send a postcard with an offensive message on to the first person who replies to this’. Then, the replies came in.

Over 1000 abusive postcards later, Mr. Bingo has become the world’s hate mailist par excellence, verbally and visually abusing people the world over, all eager to receive their own bespoke piece of personalised spite. Hilariously irreverent and insidiously inspired, Hate Mail: The Definitive Collection is the ultimate celebration of Mr. Bingo’s Hate Mail project. Previously available only via a Kickstarter subscription, this bumper edition of ALL NEW postcards is a must-have for all Hate Mail devotees.

“I love his blend of dark humour and witty drawings, and like to have it to hand when I need a laugh”