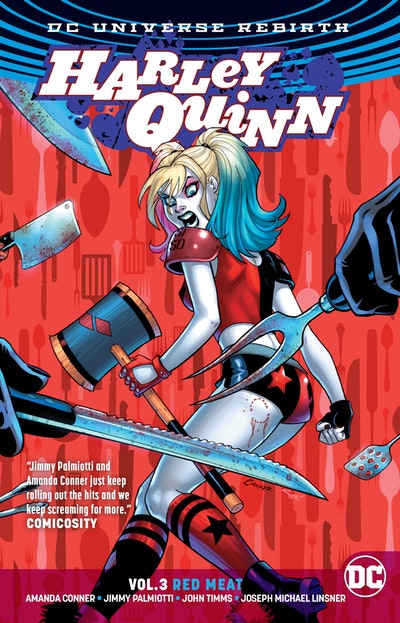 With her life finally clear of psychotic clowns, Harley Quinn is eager for things in Coney Island to get back to (ab)normal. If only! Comics’ most adorable antihero is about to face the fight of her life!

First, she’s taking on the corrupt mayor of New York City, whose evil plan for the homeless population will take a bite out of the Big Apple in more ways than one. They say you can’t fight city hall, but they haven’t met Harley Quinn!

Next, it’s the return of Harley’s former adversary, Harley Sinn! This twisted sister is out of prison with plans for revenge. When Sinn targets someone Harley loves—and thought she’d lost—can anything stop the wrath of the mighty Quinn?

“It's silly, it's funny, it's irreverent.”—Comic Book Resources "Every bit as chaotic and unabashedly fun as one would expect.”—IGN   “Harley Quinn is a pure joy as a self-referential comedic anti-villain, and an antidote to the far too serious superhero operas that it shares its universe with.”—Newsarama