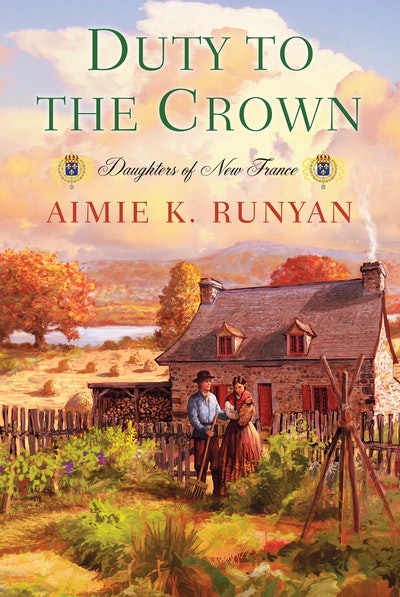 Duty To The Crown

Set amid the promise and challenge of the first Canadian colonies, Aimie K. Runyan’s vividly rendered novel provides a fascinating portrait of the women who would become the founding mothers of New France.

In 1667, an invisible wall separates settlers in New France from their Huron neighbors. Yet whether in the fledgling city of Quebec or within one of the native tribes, every woman’s fate depends on the man she chooses—or is obligated—to marry. Although Claudine Deschamps and Gabrielle Giroux both live within the settlement, their prospects are very different. French-born Claudine has followed her older sister across the Atlantic hoping to attract a wealthy husband through her beauty and connections. Gabrielle, orphan daughter of the town drunkard, is forced into a loveless union by a cruel law that requires her to marry by her sixteenth birthday. And Manon Lefebvre, born in the Huron village and later adopted by settlers, has faced the prejudices of both societies and is convinced she can no longer be accepted in either. Drawn into unexpected friendship through their loves, losses, and dreams of home and family, all three women will have to call on their bravery and resilience to succeed in this new world… Praise for Promised to the Crown “A heart-wrenching and timeless tale of friendship, love and hope that skillfully blends history and romance to educate, entertain and inspire.” --Pam Jenoff, author of The Last Summer at Chelsea Beach