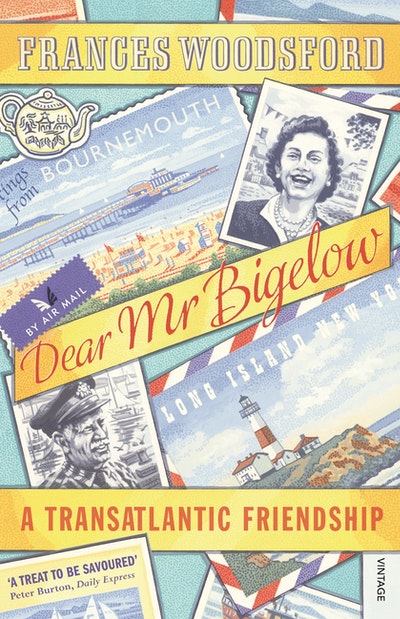 Lively and vibrant, Frances Woodsford's letters to America from austerity Bournemouth have recently come to light to give a heartwarming glimpse into post-war England.

Dear Mr Bigelow is an enchanting collection of weekly letters written between 1949 and 1961 from an unmarried woman working at the Public Baths in Bournemouth, to a wealthy American widower in New York. Frances Woodsford and Paul Bigelow never met, yet their epistolary friendship was her lifeline. We follow Frances's trials with her ghastly boss Mr Bond; the hilarious weekly Civil Defence Classes as the Cold War advances; her attempts to shake off an unwanted suitor, and life at home with her mother and her charming ne'er-do-well brother.

Sparked with comic genius, the letters provide a unique insight into post-war England and the growth of an extraordinary friendship.

Frances Woodsford was born in 1913. She was exceptionally bright at school, and an academic career looked likely, but her father died in 1927 the day she took Higher Matric. She left school to work as a secretary, to help provide for the family during the Depression. After taking an administrative job at a local garage, she taught herself engineering and ran practical workshops during the Second World War. When the war ended she took a position as secretary in the Public Baths Department of Bournemouth Town Council, where she worked for the duration of her correspondence with Mr Bigelow. Frances had eighty or more correspondents, but Mr Bigelow was particularly special and she wrote to him for twelve years up until his death in 1961.
She continued to work for the Council until her retirement in 1974; her final position was as archivist. Extraordinarily, in 2006, her letters to Mr Bigelow came to light and were returned to Frances. They are the testimony of an ordinary life but their vigorous prose suggests that with other opportunities, Frances could have been a professional writer.
Frances never married. She is ninety-five and lives in Bournemouth.

Many pleasing and interesting small touches...

Packed with comic moments and social history, the letters are a beady commentary on her life and times

A treat to be savoured

Provide an insight into post-war Britain

This delightful collection of letters...a sequence of bright, witty and charming letters

Anyone wanting to remember or discover the details of life in the Fifties, those dreary but cosy post-war years, should read this extraordinary book.