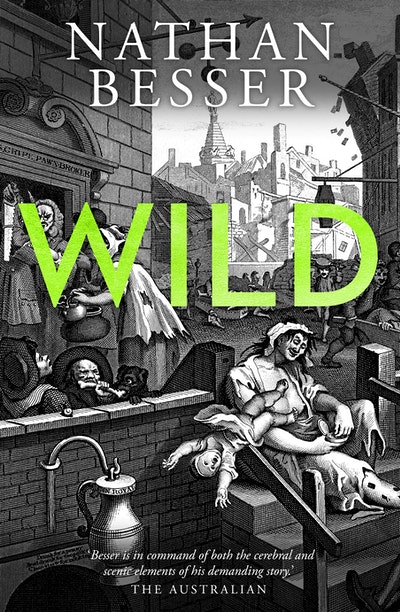 I begin my story

(am born to parents)

Aye, I admit it hadn’t been an easy afternoon for my father, what with the failure of his invention and Mother’s inclination to remind him of it. Also, the money he’d spent on a new periwig was now to no purpose. I was lying on the corner straw of our croft – for you couldn’t call our residence a house nor a cottage – when he finally unlatched the bolt. It was evident by his many unsuccessful attempts at getting through the doorway that he’d been consoling himself at Mr Bubo’s Alehouse.

He lit a candle from the stove and his face was no pretty sight. His eyes were red like flesh and his skin was white like eyes.

‘Father,’ said I, to his wretched form.

He made no answer and bungled about for victuals.

‘Am I to presume,’ called my mother from her bed, ‘that another day has passed without a taker?’

‘This meat,’ said Father, changing the subject, ‘must be hung.’

Then he was above me, with a slab of meat hanging from a leather strap that he hooked on a rafter. The strap creaked and the rafter did too.

‘So when you told me you needed a new wig,’ said my mother. ‘For people to take your invention seriously –’

‘That’s good,’ said Father, assessing the placement of the meat.

‘You quit your job to build that inconceivable thing. And then spent all our money on a periwig.’

‘I didn’t buy the accompanying powder,’ offered he. ‘That strengthens and maintains the curls.’

‘Shouldn’t the meat hang nearer the fire,’ said I.

‘The smoke will cure it. And the salt. It’s falling on my face.’

‘So now we have no money. And Mr Wilkins won’t take you back.’

‘If there’s anything your face needs, boy,’ said my father, directing his temper to me, ‘’tis salt!’

I thought long and hard about this, as the saying goes, but could make no sense of it.

‘When our son asks me for dinner,’ continued my mother, ‘am I to tell him to eat some of Daddy’s wig?’

‘Shut your slit,’ said Father. ‘This is your fault.’

I said no more, listening to him undress and belch. The bedframe squeaked as he settled to his place.

‘We will have to sell King Richard,’ said she, referring to our treasured family heirloom.

‘Sell the damned thing so we might have victuals for the year.’

Father had inherited King Richard from a great uncle who had supposedly been in service to the Earl of Russell. It was a velvet pheasant, purple in colour, two pearls as eyes and faded porcelain talons. I knew not the purpose of such a thing – maybe a toy for gentry children – which looked not dissimilar to human by-product following a dinner of beetroot. It was kept in an iron tin and hidden in a pile of sawdust.

‘King Richard is the charm of this family’s sustenance,’ said Father. ‘The day we sell it is the day I croak.’

‘This family’s sustenance? ’ scoffed my mother. ‘Your gin-breath is my sustenance.’

‘We are luckier than many. Think of the Bellybrokes.’

‘What do you think ’tis worth, Father?’ asked I, referring to the velvet pheasant.

‘Some things in this world,’ replied he in his prodigious wisdom, ‘are without a price.’

I had considered his invention – though I couldn’t understand it – an evidence of the same wisdom. It was called The-Ladder-that-can-Turn-a-Corner! He’d spent no fewer than fourteen days on Market Street, Wolverhampton, demonstrating the merits and applications of this invention, yet not a single soul saw eye to eye on the matter of The-Ladder-that-can-Turn-a-Corner! Word was the no-good Dicky Failsafe had nailed a sign high on the oak tree under which Father stood. It read Man-that-can’t-Sell-a-Ladder!

Mother and Father’s quarrelling was soon replaced by a duet of snoring like two broken well-pumps, wheezing then squeaking, spluttering then ejaculating. The stinky meat swayed above me on the leather strap. A great clue to life’s circularity, I suppose, that what held up the flesh was once flesh itself. Even at my tender age of ten year or so I was already desperate to be gone of that croft and its shortcomings viz. my snoring mother and drunken father and swaying meat with its falling salt. Events soon presented with just such an opportunity, which I shall narrate presently.

I am indentured to a bucklemaker

When maturity was upon me at fourteen year of age I was arranged an apprenticeship under old Mr Dampier, Bucklemaker of Wolverhampton. He was a most religious man, but without the ability to read, he simply recited the few passages from The Lord’s Book that he could recall.

‘Jesus fed five thousand men,’ he spoke to me upon our first meeting, and many times thereafter. ‘With five loaves and two fishes with twelve baskets left.’

Of the nineteen children that Mrs Dampier had borne, ten were still living – all of the fairer sex – in their not-insubstantial house that they’d acquired from Master Dampier’s in-laws, who’d died of plague in 1660. Of those ten living children, two more died during the early years of my apprenticeship, leaving eight girls who, as far as I know, went on to live long and healthy to forty or more. Their names, I can remember all, were Mary, Elizabeth, Millicent, Anne, Eleanor, Magdalene, Amphelisia and Edith, though I couldn’t assign which name belonged to which girl, except for Magdalene who was only five year, and Millicent, of course, the middle daughter, about whom you shall hear before long.

My days were spent engaged in the performance of either menial or cruel tasks or often a combination thereof viz. extending out Dampier’s cesspit with a hand-shovel, or scrubbing each and every line of mortar on a daily basis, or stoking the burning hot coals, or bearing bucket after bucket to and from the river &c. And so in this way – bent, burned and beaten by old Master Dampier – I was quickly exposed to the pains of my gender. Respite came at a sharp four of the clock every afternoon, when I was invited to sup with the entire family. Together with all the Dampier children, I sat stone-still with my head bowed as Master Dampier conducted a long and irrelevant Grace.

On one such afternoon I detected movement from beneath the table that soon became apparent as the toe of a shoe pressed below my knee. I dared not raise my head in attempts to discover whose toe it might be, instead furtively lifting my eyes. But I only saw eight girl-heads, all similarly stooped in fear of Master Dampier, who made no distinction between genders when it came to beating. Indeed, for a man of Master Dampier’s age and frailty, he could swiftly summon the strength of five men for the purposes of beating. I presumed it must have been a mistake, some sort of involuntary movement of the leg, but nay, the following dinner the same thing happened during Grace, this time on my knee itself, and still I couldn’t decipher to which sister the toe belonged.

Thus dinner became a most anticipated event; on Lord’s Day, when I was obligated return to my family, I longed to be back in the Dampiers’ home so that I might feel the rubbed-down leather shoe that tapped against my knee like a nervous maidservant at her master’s door. I had it in my design to analyse the footwear of each girl, but Mrs Dampier, so as to advantage herself of discount, had purchased the same shoe for each and all her daughters, rendering this design of mine useless; and so it went on until finally, being at the end of my tether after two weeks of knee-tapping, did I reach down and grab the shoe, which came clean off into my hand. I dared neither move nor make any noise lest I interrupt Grace and was thus left with the shoe in my hand for most of dinner, the curves and contours of which I of course caressed and fingered. The culprit – Millicent, it may be known to you now – still made no gesture to indicate that it was her shoe I was holding in my trembling hand; indeed, I was only to discover this after supper when we were excused and she bobbed off like a three-legged dog.

Millicent was of towering stature, with a long dark mane of hair that she combed and plaited constantly, and then tied into a tether that curled like a thick black snake around her neck to between the nascent lumps of her bony chest. Millicent differed from her sisters only in eyes and attitude, which were both exceedingly dark, opaque even. Indeed, she was like an unfamiliar room in which you find yourself without lamp or candle, stumbling into furniture. She hadn’t spoken to me, not once in the two year I had been indentured to her father. What now was I to do?

I spent the long night deliberating on a course of action, but, without any better idea, simply raised my own left shoe beneath the table the following day. My legs were much shorter than the lengthy Millicent’s, so my foot motioned about uselessly in the air like a rudder out of water. I slid my jacksy forward so that I might reach her, and when I finally did, feeling the hard unmistakable texture of knee-bone beneath my leather sole, Millicent immediately grabbed my own shoe and ripped it off.

‘Millicent, what are you fussing about there?’ demanded Master Dampier.

‘If you can’t repress an itch during Grace,’ said he, ‘then you are hardly suited to sup at the table.’

‘I’m sorry, sir,’ said she, looking into my panicked eyes. ‘It will be repressed hereafter.’

Millicent, my eyes now determined, was the most handsome creature in all of Britain, with eyebrows dark and thick and almost joined above her crooked nose (that was broken in infancy, she was to tell me much later), and long bony fingers with the nails bitten down, and hipbones high and large enough to see their pronouncement through the folds of her dress. With all these handsome features I had it in mind to marry her as soon as was practicable, if you get my drift, but being only sixteen year of age and indentured to her father it would be a length of time unimaginable; for in adolescence, as we all know, one day is a year and one year is ten; so I was resigned to watch her across the dinner table only, with no way of possibly being alone with her in a house of nine others and chained to Master Dampier’s workbench throughout the day. Before long, her under-table caresses were barefooted, reaching her toes across to fiddle and caress the stocking at my shin, and even once venturing above my knee, at which point Master Dampier demanded to know if she was itchy again and she sank urgently back into her place.

An absolute romp, lead by Daniel Defoe and Jonathan Wild, through the criminal underbelly of thriving 17th century London.