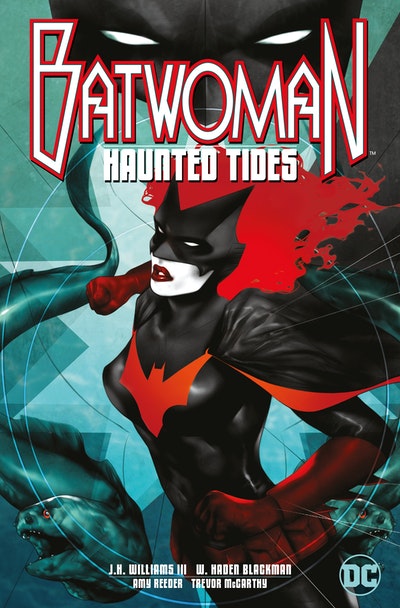 The complete Haunted Tide story from the New York Times best-selling Batwoman series by acclaimed comic talent J.H Williams III gets collected here for the first time! Batwoman is soon to be a show on the CW, this story is perfect place to start reading more about this strong, fascinating character.

Monsters from myth and legend are preying upon the children of Gotham. La Llorna, "The Weeping Woman", drowns her victims in sorrow... or worse. Batwoman is no stranger to sorrow herself. Estranged from her father, she blames him for the death of her sister - but she blames herself most of all.

Batwoman's mind, body and sould have been battered as never before, but she's emerged from her trials stronger than ever. On a collision course with the mother of monsters, no one - not the GCPD, not the shadowy Department of Extranormal Operation, and not the people who care about her the most - will stop her from seeking justice.

J.H. Williams entered the comics field in 1991 and immediately began getting attention for his finely crafted work on such titles as Batman, Starman and Seven Soldiers of Victory. William's went on to co-create and pencil the hit series Promethea with comics legend Alan Moore. His recent works include Batman: The Black Glove with Grant Morrison and Batman: Detective with Paul Dini.

W. Haden Blackman is a corporeal spirit haunting portions of San Francisco, where he manifests to serve a prominent computer game company. He rarely appears during the day, cannot be photographed, and is easily repelled by the sight of religious artifact.