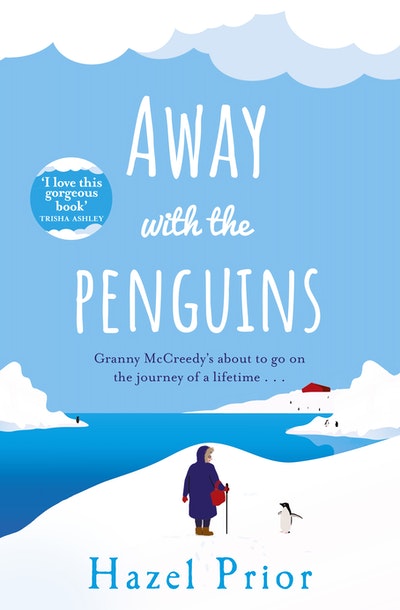 Away with the Penguins

The Ballahays, Ayrshire, Scotland
May 2012

I have told Eileen to get rid of all the mirrors. I used to like them but I certainly don’t now. Mirrors are too honest. There is only so much truth a woman can take.

‘Are you sure, Mrs McCreedy?’ Her voice implies she knows my mind better than I do. She always does that. It is one of her innumerable annoying habits.

She clicks her tongue and tilts her head to one side so that her corkscrew curls brush against her shoulder. It’s quite a manoeuvre when you consider the extraordinary width of her neck.

‘Even the lovely one with the gilt edge, the one over the mantelpiece?’

‘Yes, even that one,’ I explain patiently.

‘And all the bathroom mirrors too?’

‘Especially those!’ The bathroom is the last place I want to look at myself.

‘Whatever you say.’ This in a tone bordering on impertinence.

Eileen comes every day. Her main role is cleaning, but her domestic skills leave much to be desired. She seems to be labouring under the impression that I don’t see dirt.

Eileen has a limited collection of facial expressions: cheerful, nosy, busy, nonplussed and vacant. Now she puts on her busy face. She bumbles around emitting a semi-musical noise like a bored bee, collecting the mirrors one at a time and stacking them in the hall. She is unable to close the doors behind her because her hands are full, so I follow in her wake, shutting them carefully. If there’s one thing that I can’t abide in life, it’s a door left open.

I stroll into the larger of the two sitting rooms. There is now an unsightly dark rectangle on the wallpaper above the mantelpiece. I’ll have to fill the space with something else. A nice oil painting with plenty of verdure, I think; maybe a Constable print. That would set off the Lincoln green of the velvet curtains. I should like a calming pastoral scene with hills and a lake. A swathe of landscape empty of human beings would be best.

‘There we are, then, Mrs McCreedy. I think that’s all of them.’

I like the house much better now that it’s lost the appalling spectres of Veronica McCreedy taunting me from every corner. Eileen puts her hands on her hips. ‘Well, I’ll be putting this lot away, then. I’ll bung them in the back room, shall I? There’s still some space in there.’

The back room is excessively dark and a little on the cold side, not really usable as a living space. The spiders think it belongs to them. Eileen, in her great wisdom, uses it as a depository for any item I desire to be rid of. She is a firm believer in hoarding everything ‘just in case’.

She heaves the mirrors across the kitchen. I resist the urge to close the doors as she goes back and forth, knowing this will only make life more difficult for her. I console myself with the thought that they’ll all be shut again soon.

She is back five minutes later. ‘I hope you don’t mind me asking, Mrs McCreedy, but I had to move this out of the way to fit the mirrors in. Do you know what it is, what’s in it? Do you want it? I can always ask Doug to take it to the rubbish tip next time he goes.’

She dumps the old wooden box on the kitchen table and goggles at the rusty padlock.

I choose to ignore her questions and enquire instead, ‘Who is this Doug?’

I’d forgotten she was married. I’ve never been introduced to the unfortunate man.

‘Well, I shan’t be requiring him to take any of my possessions to the rubbish tip in the near or indeed distant future,’ I tell her. ‘You can leave it on the table for the time being.’

She runs her finger along the top of the box, stroking a clean trail in the dust.  Expression number two (nosy) has now established itself on her face. She leans in towards me conspiratorially. I lean backwards a little, having no desire whatsoever to conspire.

‘I’ve tried the padlock to see if there might be something valuable inside,’ she confesses, ‘but it’s stuck. You need to know the code if you want to open it.’

‘I am well aware of that fact, Eileen.’

She clearly assumes I am as clueless about the contents as she is.

My skin crawls at the thought of Eileen looking inside. Other people meddling is the very reason I locked it all up in the first place. There is only one person who I will ever permit to see the contents of that box and that person is myself.

I am not ashamed. Oh no, never that. At least . . . But I absolutely refuse to be led down that path. There are things contained in that box that I have managed not to think about for decades. Now the mere sight of it provokes a distinct wobble in my knee joints. I sit down quickly. ‘Eileen, would you be kind enough to put the kettle on?’

The clock strikes seven. Eileen has gone and I am alone in the house. Being alone is supposed to be an issue for people such as me, but I have to say I find it deeply satisfying. Human company is necessary at times, I admit, but it is almost always irksome in one way or another.

I am currently settled in the Queen Anne armchair by the fire in the ‘snug’, my second and more intimate sitting room. The fire isn’t a real one with wood and coal, alas, but an electric contraption with fake flames. I have had to compromise on this, as with so much in life. It does at least fulfil its primary requirement of producing heat. Ayrshire is chilly, even in summer.

I switch on the television. A scraggy girl is on-screen. She’s screeching her head off, spiking her fingers in the air and caterwauling, something about being titanium. I hastily change channels. I flick through a quiz show, a crime drama and an advertisement for cat food. When I return to the original channel the girl is still caterwauling, ‘I am titanium.’ Somebody should tell her she isn’t. She is a silly, noisy, spoilt brat. What a relief when she finally shuts her mouth.

At last it’s time for Earth Matters, the only programme all week that is worth watching. Everything else is sex, advertising, celebrities doing quizzes, celebrities trying to cook, celebrities on a desert island, celebrities in a rainforest, celebrities interviewing other celebrities, and a whole load of wannabes doing everything they can to become celebrities (with a spectacular success rate in making fools of themselves). Earth Matters is a welcome respite, demonstrating as it does in manifold ways how much more sensible animals are than humans.

However, I am dismayed to find that the current series of Earth Matters seems to have ended. In its place there’s a programme called The Plight of Penguins. With a gleam of hope I observe that it is presented by Robert Saddlebow. That man demonstrates that it is occasionally possible to be a celebrity for the right reasons. Unlike the vast majority, he has actually done something. He has voyaged around the world campaigning and raising awareness of conservation issues for several decades. He is one of the few people for whom I feel a degree of admiration.

This evening Robert Saddlebow is relayed to my fireside all bundled up and hooded, in the midst of a white wasteland. A flurry of snowflakes whirls around his face. Behind him is a clump of dark shapes. The camera homes in and reveals them to be penguins, a seething great tribe of them. Some are huddled together, others sleeping on their bellies, others waddling round within the group, on missions of their own.

Mr Saddlebow informs me that there are eighteen species of penguin in the world (nineteen if you count White-flippered Little Blues as a separate species), many of which are endangered. During the filming of the programme, he says, he has developed a massive respect and admiration for these birds – for the race as a whole, for each species and for every individual penguin. They live in the harshest conditions on the planet and yet daily take on challenges with a gusto and spirit that would put many of us humans to shame. ‘What a tragedy it would be if any one of these species was lost to the planet!’ declares Robert Saddlebow, fixing his ice-blue eyes on me from the screen.

‘A tragedy indeed!’ I say back to him. If Robert Saddlebow cares about penguins this much, then so do I.

He explains that each week he’s going to pick a different penguin and show us the qualities that make the chosen species unique. This week features the Emperor penguins.

I am transfixed. Every year Emperor penguins walk some seventy miles across a desert of ice to reach their breeding ground. This is indeed a remarkable achievement, especially when you consider that travelling on foot isn’t exactly their forte. They walk like Eileen, shuffling forward with a singular lack of grace. They look rather uncomfortable in their own skins. Yet their persistence is inspiring.

When the programme is finished, I pull myself out of the chair. I have to acknowledge this is not as difficult a task as it is for many others who have reached my mature years. I would even classify myself as sprightly. I am aware that this body cannot be wholly relied upon. In the past it was a faultless machine, but these days it has suffered losses in both elasticity and efficiency. I must be prepared for the fact that it might let me down at some point in the near future. Yet so far it has managed to keep going marvellously well. Eileen, with her habitual charm, often comments that I am ‘as tough as old boots’. Every time she says this I’m tempted to reply, ‘All the better to kick you with, my dear.’ I repress the urge, though. One must always strive to avoid rudeness.

It is a quarter past eight. I make my way to the kitchen to get my evening cup of Darjeeling and a caramel wafer. My eye falls on the wooden box, still sitting unopened on the table. I consider twisting the combination on the padlock and taking a peek at what’s inside. In an illogical, sadistic sort of way I’d like to. But no, that would be a foolish move. It would be like Pandora in the myth, letting loose a thousand demons. The box must absolutely go back to the spiders without my interference.

A truly feel-good book club read, and the perfect gift for mum (or granny!) for Mother's Day.Veronica McCreedy is about to have the journey of a lifetime . . .