Philippa Forrester has a degree in Environmental Science from Birkbeck College, University of London, and is the proud mum of three inquisitive boys: Gus (3), Arthur (6) and Fred (9). She is also known for her wealth of experience on live television, including Tomorrow's World, presenting alongside Peter Snow for seven years. In addition she presented many documentaries for the BBC's Natural History Unit and runs a production company 'Halcyon Media' with her husband Charlie Hamilton-James.

Charlie Hamilton James is the husband of Philippa and father of Gus, Arthur and Fred (he says, as far as he knows) and has been filming and photographing wildlife for over twenty years. He is particularly passionate about otters and kingfishers and has become a world ranked authority on both. Credits include: My Halcyon River - Natural World for BBC2; The Wild Wood - Natural World BBC1; On the Trail of Tarka - Natural World BBC1; Wye - Voices from the Valley - Natural World BBC1; and Saving Grace - Animal Planet. Charlie has won numerous international awards for his work including Young Wildlife Photographer of the Year 1990 and 1991, Best Cinematography - Wildscreen 2004, the Royal Television Society Award for Cinematography 2007 and he was BAFTA-nominated in 2008. 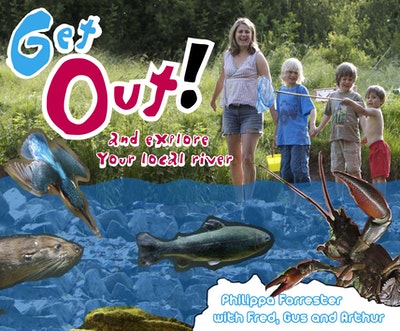 Accompanying the major four-part BBC1 TV series to be screened in Spring 2010, this is the story of one family's year living by a West Country river. Written by award-winning wildlife writer Philippa Forrester and her children.